Feast for the Soul: Jim Harrison on Food and Life

By Ann Levin, The Associated Press

In 2004, Jim Harrison wrote an article for The New Yorker about a 37-course lunch he ate in France “that likely cost as much as a new Volvo station wagon.” Fully expecting to be criticized, he offered a defense at the outset. “My response … is that none of us 12 disciples of gourmandise wanted a new Volvo. We wanted only lunch and since lunch lasted approximately 11 hours we saved money by not having to buy dinner.”

Jim Harrison, the fiction writer, poet, outdoorsman and reveler who wrote with gruff affection for the country’s landscape, died Saturday, March 26, 2017. He was 78.

Absurd? Yes, but also funny and true and typical of Harrison, whose dry wit and mordant insight are on glorious display in this new collection of essays published a year after his death. Harrison, a prolific poet and novelist best known for “Legends of the Fall,” died of a heart attack at age 78. While nominally about wine and food — his friend Mario Batali wrote the introduction — what distinguishes the essays are Harrison’s poetic sensibility, metaphysical musings and moral outrage at the state of our nation. Several were written around the invasion of Iraq, which left him seething.

Nearly every piece has a saying wise enough to carry in your wallet. Some will flat out break your heart.

And just in case you wondered, he has no regrets about that 37-course meal.

Read The Rest at The Fayetteville Observer > 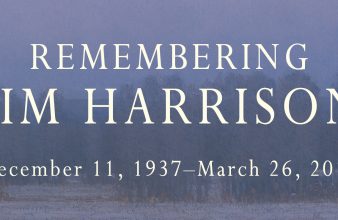