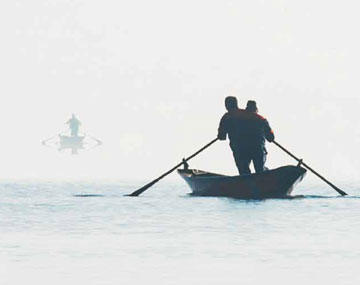 Donna Leon, born in New Jersey in 1942, has worked as a travel guide in Rome and as a copywriter in London. She taught literature in universities in Iran, China, and Saudi Arabia. Commissario Brunetti made her books world-famous. Donna Leon lived in Italy for many years, and although she now lives in Switzerland, she often visits Venice.

So Shall You Reap

Unto Us a Son Is Given

The Temptation of Forgiveness

The Waters of Eternal Youth

Through a Glass, Darkly

A Sea of Troubles

Quietly in Their Sleep

A Question of Belief

My Venice and Other Essays

The Girl of His Dreams

Death in a Strange Country

Blood from a Stone

The Jewels of Paradise

by Donna Leon
Previous Next

“A splendid series . . . with a backdrop of the city so vivid you can almost smell it.” —The Sunday Telegraph (London)

“Few detective writers create so vivid, inclusive and convincing a narrative as Donna Leon, the expatriate American with the Venetian heart. . . . One of the most exquisite and subtle detective series ever.” —Paul Skenazy, The Washington Post

“Donna Leon can paralyze the reader with joyful suspense.” —The Mail on Sunday (London)

“Wondrous . . . A reader who is new to the series can start anywhere and pretty much be up to snuff with Commissario Brunetti, his family, co-workers, and the highs and lows of Venice, his lifelong home. The books are character studies, triptychs and psychological dissertations, all wrapped around the heart of a mystery.” —Bookreporter

“The modest building on the Fondamenta San Lorenzo which houses the Questura is likely to become as much a tourist attraction as the Quai des Orfèvres.” —Times Literary Supplement (London)

“Donna Leon is the ideal author for people who vaguely long for a good mystery. That Leon is also a brilliant writer should only add to the consistently comforting appeal of her Venetian procedurals featuring Commissario Guido Brunneti. Leon allows her warmhearted detective to take what solace he can from the beauty of his city and the homely domestic rituals that give him the strength to go on.” —Marilyn Stasio, New York Times Book Review

“One of the best international crime writers . . . and her tales . . . set in Venice are at the apex of continental thrillers.” —Peter Mergendahl, Rocky Mountain News

“Leon’s gentle pace allows conversation and atmosphere to develop so full and founded that you can taste the coffee and smell the flowers. . . . You’ll want to catch the first plane over there.” —Phillipa Stockley, The Washington Post

“I struggle to think of other series authors who are as dependable as the excellent Leon.” —Maxine Clarke, The Philadelphia Inquirer

“Donna Leon depicts the characters, food, culture, and people of Venice with a knowing eye for ‘just the right’ detail.” —Jennifer McCord, Bookreporter.com

“Leon uses the relatively small and crime-free canvas of Venice for riffs about Italian life, sexual styles, and—best of all—the kind of ingrown business and political corruption that seems to lurk just below the surface.” —Dick Adler, Chicago Tribune

“[Leon] has never become perfunctory, never failed to give us vivid portraits of people and of Venice, never lost her fine, disillusioned indignation.” —Ursula K. LeGuin, The New York Times

“The most obvious appeal of Donna Leon’s novels about Commissario Guido Brunetti is that they are so supremely civilized. For readers with a certain mindset—distaste for violence, love of Italy’s cultural and sensual pleasures and scorn for officialdom—Leon’s novels are always a pleasure.” —Patrick Anderson, Washington Post

“[Leon] is terrific at providing, through [her] weary but engaging protagonist, a strong sense of the moral quandaries inherent in Italian society and culture.” —Eddie Muller, San Francisco Chronicle

“Donna Leon guides us through Venice like James Ellroy through Los Angeles or Manuel Vázquez Montalbán through Barcelona: with an eye used to detect what lies behind the façade.” —Le Figaro (Paris)

“Sensitive, incredibly colourful social portraits, close-ups of a splintered, encrusted society. But finally it is probably Guido Brunetti who makes the novels so successful. The reader follows him with pleasure through the narrow, winding streets of Venice.” —Der Spiegel (Hamburg)

“One gets addicted to Brunetti.” —News (Vienna)

“Donna Leon is a top thriller writer, on a par with Agatha Christie, Dorothy L. Sayers, Patricia Highsmith and Ruth Rendell. Women, so it would seem from literary history, have always been in their element with the genre of murder and violence.” —Sonntags Zeitung (Zurich)

“Brilliantly evokes Venetian atmosphere. The characters of Brunetti and his family continue to deepen throughout this series.” —The Times (London)

“Crime writing of the highest order: powerful, relevant and all too full of human failings.” —The Guardian (Manchester)

“One of the best of the international crime writers is Donna Leon, and her Commissario Guido Brunetti tales set in Venice are at the apex of continental thrillers.” —Jane Dickinson, Rocky Mountain News

“Donna Leon has a wonderful feel for the hidden evils that lie below the façade of the magical city, and Brunetti, sturdy family man and cynic, is an endearing guide into the machinations of Italian society.” —Marcel Berlins, The Times (London) on Blood from a Stone

“No one knows the labyrinthine world of Venice or the way favoritism and corruption shape Italian life like Leon’s Brunetti. Blood from a Stone [and] all thirteen other Brunettis are now in paperback for those who have not yet met the thoughtful Venetian cop with a love of food, an outspoken wife, and a computer-hacker secretary who plays man Friday to his detective.” —Johanna McGreary, Time on One of 6 Detective Series to Savor

“The appeal of Guido Brunetti, the hero of Donna Leon’s long-running Venetian crime series, comes not from his shrewdness, though he is plenty shrewd, nor from his quick wit. It comes, instead, from his role as an Everyman . . . [his life is] not so different from our own days at the office or nights around the dinner table. Crime fiction for those willing to grapple with, rather than escape, the uncertainties of daily life.” —Bill Ott, Booklist on Blood from a Stone

“One of the most popular crime series worldwide . . . Leon’s vivid evocation of the city of Venice is, of course, part of the appeal . . . While the Brunetti books, with their abundance of local color and gastronomic treats, appeal to the fans of the traditional mystery, Leon has something darker and deeper in mind.” —Glenn Harper, Life Sentence

“These Leon novels are a pensive pleasure, refined in technique and humane in the vision they express.” —Peter Craven, Sydney Morning Herald

Winner of the Suntory mystery fiction Grand Prize for Death at La Fenice
Winner of the Golden Book award from the Austrian Booksellers Association
International Deutscher Krimi Preis, 3rd Place, for Dressed for Death
Winner of the CWA Silver Dagger award for Friends in High Places
Winner of the Chorine–International Book Prize for Willful Behaviour
Winner of the Spoken Word Awards Silver Award for Blood From a Stone
One of Time Magazine’s 6 Detective Series to Savor
Named as one of The Times (London) Fifty Greatest Crime Writers

Dressed for Death (previously published in the United Kingdom as The Anonymous Venetian. HarperCollins, 1994; Penguin, New York, May 2006)

The Death of Faith (Published previously in the United States by HarperCollins as Quietly in Their Sleep. Macmillan, London, 1997)

Mystery novelist Donna Leon continues the long tradition of foreigners writing about Venice. No other city has been so celebrated by its expatriate writers and visitors, from Ruskin’s glittery tributes to Henry James’s hesitant adoration to Thomas Mann’s fatal seduction. But Commissario Brunetti is not a foreigner, so his Venice illuminates the paradox of living in the world’s most beautiful urban setting built—not just on water—on danger and menace. From his first walk in the prize winning 1992 Death at La Fenice he never forgets her past glory nor ignores her diminished present. With these twin views his every walk through the city creates a richly layered vision.

This vision can still be experienced today. Through a selection of walks that focus on various sestiere of Venice—Dorsoduro with its foreign artists’ colony, Cannaregio’s back calle‘s steeped in time past plus others—the books come alive again. One sample walk  follows Brunetti’s progress from his earliest midnight walks around La Fenice (1992) to his musings near the Rialto in Doctored Evidence (2004). Wherever Brunetti finds murderers and victims, eats and drinks, reflects on what the city has come to mean to him amidst all her changes can be traced through passages from each of the numerous novels, aided by accompanying maps.

Dr. Toni Sepeda, Professor of Literature and Art History for 15 years in Northern Italy for the University of Maryland, offers individual or group tours lasting 1-2 hours, by appointment Thursday through Sundays. She is the only lecturer authorized by Donna Leon to conduct events in Brunetti’s Venice. For further information email tosepeda@libero.it 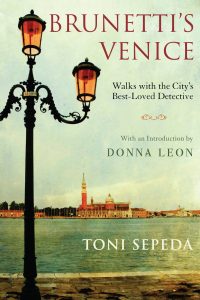 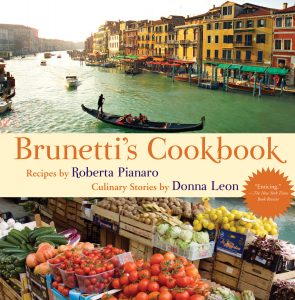