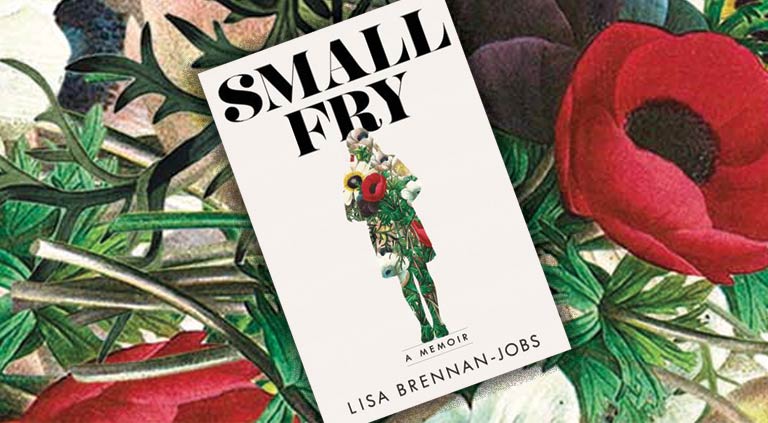 A frank, smart and captivating memoir by the daughter of Apple founder Steve Jobs.

Born on a farm and named in a field by her parents—artist Chrisann Brennan and Steve Jobs—Lisa Brennan-Jobs’s childhood unfolded in a rapidly changing Silicon Valley. When she was young, Lisa’s father was a mythical figure who was rarely present in her life. As she grew older, her father took an interest in her, ushering her into a new world of mansions, vacations, and private schools. His attention was thrilling, but he could also be cold, critical and unpredictable. When her relationship with her mother grew strained in high school, Lisa decided to move in with her father, hoping he’d become the parent she’d always wanted him to be.

Small Fry is Lisa Brennan-Jobs’s poignant story of a childhood spent between two imperfect but extraordinary homes. Scrappy, wise, and funny, young Lisa is an unforgettable guide through her parents’ fascinating and disparate worlds. Part portrait of a complex family, part love letter to California in the seventies and eighties, Small Fry is an enthralling book by an insightful new literary voice.

“Brennan-Jobs is a deeply gifted writer… Her inner landscape is depicted in such exquisitely granular detail that it feels as if no one else could have possibly written it. Indeed, it has that defining aspect of a literary work: the stamp of a singular sensibility… Beautiful, literary, and devastating.”—New York Times Book Review

“Extraordinary… An aching, exquisitely told story of a young woman’s quest for belonging and love.”—People, “Book of the Week”

“An epic, sharp coming-of-age story from the daughter of Steve Jobs. It’s rare to find a memoir from a celebrity’s child in which the writing is equal to―or exceeds―the parent’s reputation, but that is the case with Brennan-Jobs’ debut. In a lesser writer’s hands, the narrative could have devolved into literary revenge. Instead, Brennan-Jobs offers a stunningly beautiful study of parenting that just so happens to include the co-founder of Apple… An exquisitely rendered story of family, love, and identity.”―Kirkus Reviews (starred review)

“Brennan-Jobs’s narrative is tinged with awe, yearning, and disappointment… Bringing the reader into the heart of the child who admired Jobs’s genius, craved his love, and feared his unpredictability.”—Publishers Weekly (starred review)

“Here is a literary coming-of-age memoir of the highest order, the story of a child trying to find her place between two radically different parents, identities, and worlds. Compassionate, wise, and filled with finely-wrought detail, Small Fry is a wonder of a book, and Lisa Brennan-Jobs is a wonder of a writer.”―Jamie Quatro

“Writing with enlightened panache and dry humor, she’s as keen a witness to the ambience of the Bay Area in the 1980s and 1990s…as she is to the behavior of the adults around her… Never having felt safe in any of her father’s houses, Ms. Brennan-Jobs has built her own house in memoir form… It’s alive in all the rough edges of its feelings, and it’s home.”—Wall Street Journal

“An intimate, richly drawn portrait… Small Fry is a memoir of uncommon grace, maturity, and spare elegance… The reader of this exquisite memoir is left with a loving, forgiving remembrance and the lasting impression of a resilient, kindhearted and wise woman who is at peace with her past.”—San Francisco Chronicle

“[Small Fry] is a story of a girl growing up in 1980s and ’90s California trying to fit into two very different families and not belonging in either. It’s the story of her single mother trying to keep it together and often not succeeding. It’s the story of a family that is as imperfect as every family, things complicated by wealth, fame and, in the end, illness and death.”—Associated Press

“A heartbreaking memoir, beautifully rendered…It’s a love story for the father that she had, flaws and all… A wise, thoughtful, and ultimately loving portrayal of her father.”—Seattle Times

“A masterly Silicon Valley gothic… The bohemian landscape she captures will be virtually unrecognizable to anyone who equates this slice of Northern California with Teslas and tiger moms… Of the book’s myriad achievements, the greatest might be making [this] story her own.”―Vogue

“Brennan-Jobs skillfully relays her past without judgement… staying true to her younger self. It is a testament to her fine writing and journalistic approach that her memoir never turns maudlin or gossipy. Rather than a celebrity biography, this is Brennan-Jobs’s authentic story of growing up in two very different environments, neither of which felt quite like home.”―Booklist (starred review)

“As clear-eyed, amusing, honest, unsentimental and sad as any memoir I’ve read in years. The prose sparkles, the vision behind it is ruefully compassionate and wise. No other book or film has captured Steve Jobs as distinctly as this one has. The love between father and daughter, thwarted and baffled as it often is, comes through beautifully.”―Phillip Lopate

“A gorgeous, compelling work of art and a dazzling coming-of-age story. This is a lovely, sweetly intimate portrait, a story told through the eyes of a daughter whose father struggled with his own origins―and who almost became the father she hoped he would be.” ―Susan Cheever

Named one of the 10 Best Books of 2018 by the New York Times Book Review and the New Yorker
A Best Book of the Year at NPR, Amazon, GQ, British Vogue, Bustle, Publishers Weekly, and Indigo
A Teen Vogue Book Club Pick

Before this, during years in which we hardly spoke, I’d seen his picture everywhere. Seeing the pictures gave me a strange zing. The feeling was similar to catching myself in a mirror across a room and thinking it was someone else, then realizing it was my own face: There he was, peering out from magazines and newspapers and screens in whatever city I was in. That is my father and no one knows it but it’s true.

Before I said goodbye, I went to the bathroom to mist one more time. The spray was natural, which meant that over the course of a few minutes it no longer smelled sharp like roses, but fetid and stinky like a swamp, although I didn’t realize it at the time.

As I came into his room, he was getting into a standing position. I watched him gather both his legs in one arm, twist himself ninety degrees by pushing against the headboard with the other arm, and then use both arms to hoist his own legs over the edge of the bed and onto the floor. When we hugged, I could feel his vertebrae, his ribs. He smelled musty, like medicine sweat.

We detached, and I started walking away.

Newsletters, offers and promotions delivered straight to your inbox.

All the Young Men