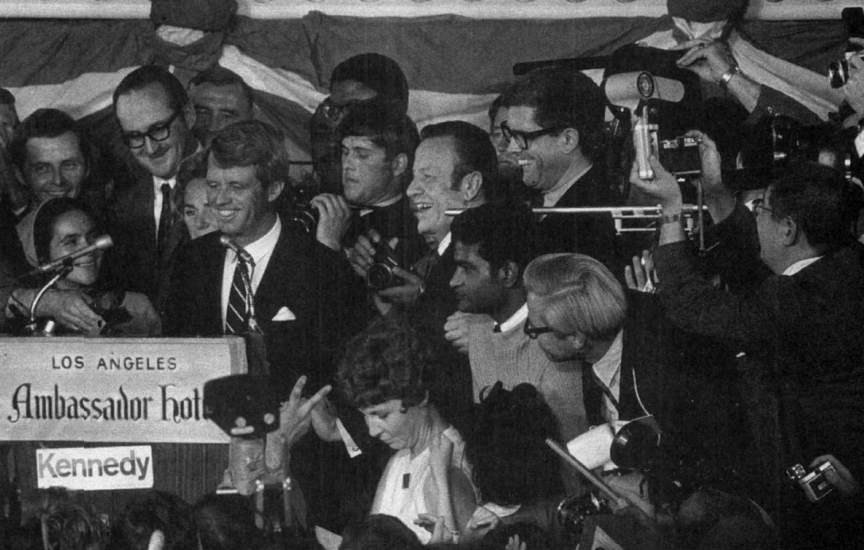 Charles Kaiser, author of 1968 in America, on the day Bobby Kennedy was assassinated

In the first three months of 1968 there was enormous hope in America, followed by unimaginable despair–first on April 4th, when Martin Luther King Jr. was assassinated, and then again, two months and one day later.

Watch Charles Kaiser describe these horrific moments on the second episode (“Spring”) of the CNN documentary 1968: The Year That Changed America, airing this Sunday, May 27, 10pm ET/7pm PT. Read on for Kaiser’s written account of the ghastly day excerpted from 1968 in America, a book that “magically conveys the spirit of the times” (The New Republic), newly reissued by Grove Atlantic. 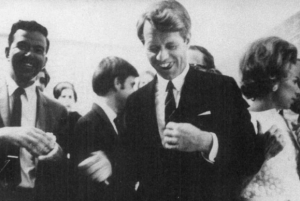 The liquor flowed happily in suite 516 of the Ambassador Hotel in Los Angeles that evening. In the California primary, Bobby Kennedy had won the most important victory of his life, and his loss in  Oregon was just a distant memory.

Columnist Jimmy Breslin was there, as well as George Plimpton, Teddy White, Ted Sorensen, Dick Goodwin and Steve Smith, and occasionally Kennedy would retreat into the bathroom with one of them for a moment of privacy.

Teddy White went on television with Walter Cronkite and called the result in the California primary “the most complete repudiation of the administration. . . . This is the clearest revolt yet of a new kind of politics against an old kind of politics.” CBS kept projecting wider and wider margins of victory for Kennedy—now Cronkite was saying he would beat McCarthy by fourteen points, 52 to 38.

The Kennedy magic was back, and it was definitely Bobby’s magic. He was forty-two, but he still looked barely over thirty.  Kennedy said to Kenny O’Donnell: “I feel now for the first time that I’ve shaken off the shadow of my brother. I feel I made it on my own.”

By midnight the crowd downstairs was getting rowdy. They were singing “This Land Is Your Land” and chanting, “We want Kennedy!”  Bobby told Ethel he was ready to go. Inside the ballroom he stood behind a lectern with a single KENNEDY sticker stuck on it, under the logo of the hotel.  He declared that California had voted “for peace and for justice and for a government dedicated to giving the people mastery over their own affairs.” He praised Gene McCarthy for “breaking the political logjam” and making “citizen participation a new and powerful force in our political life.” And he asked McCarthy’s troops to join him—“not for myself, but for the cause and the ideas which moved you to begin this great popular movement.”

Then he thanked everyone: the blacks, the Mexicans, his siblings, his mother, “and all those other Kennedys” — even his dog, Freckles. “What I think is quite clear is that we can work together. We are a great country, an unselfish country, and a compassionate country.” There were no policemen inside the hotel.  The crowd went wild, and in the film clip that would be repeated endlessly on television for the rest of the week, dozens of white boaters emblazoned with Kennedy’s image bobbed happily up and down in the ballroom. Finally he was done. “My thanks to all of you. And now it’s on to Chicago, and let’s win there!”

He gave the V sign, for victory—which also meant peace in 1968—pushed his hair off his forehead in a familiar gesture, then turned to exit through the kitchen. Andrew West, a radio reporter for KRKD, trailed Kennedy as he left the podium.

This is what his listeners heard: “How are you going to counter Mr. Humphrey as far as the delegate vote goes?” West asked. “We’re just going to start to struggle for it,” said the candidate.

It was 12:16 A.M., and Bobby paused in the kitchen to shake hands with Jesus Perez, a dishwasher. Then West started speaking again—quite hysterically: “Senator Kennedy has been shot. Is that possible? Is it possible ladies and gentlemen? It is possible he has—not only Senator Kennedy. Oh, my God. Senator Kennedy has been shot, and another man, a Kennedy campaign manager—and possibly shot in the head.  Rafer Johnson has a hold of the man who apparently has fired the shot.” Now West sounded desperate: “He still has the gun—the gun is pointed at me right at this moment I hope they can get the gun out of his hand. Be very careful, get that gun get that gun GET THAT GUN! Stay away from the gun; stay away from the gun. His hand is frozen. TAKE A HOLD OF HIS THUMB AND BREAK IT IF YOU HAVE TO; GET HIS THUMB! All right, that’s it Rafer, get it, get the gun Rafer. Hold him, hold him. We don’t want another Oswald.”

In the ballroom next door bewilderment turned into terror. A young girl screamed, “No, God, no! It’s happened again.” A black man pounded the wall. “Why, God, why? Why again? Why another Kennedy?”

Six people in the kitchen were hit by the barrage of bullets, but only one was fatally wounded. Most people believed Bobby never regained consciousness, but two witnesses insisted that they had heard Bobby speak after he was shot. When Ethel leaned down over him, her husband asked, “How bad is it?”  And Max Behrman, an ambulance attendant, swore Kennedy spoke again when he tried to pick him up. “Please don’t,” said the stricken man. “Please don’t. Don’t lift me.”

On the kitchen wall, five feet from where Kennedy had fallen, someone had scrawled five words: “The once and future king.”

On West 57th Street in Manhattan, CBS News scrambled to get back on the air. “If he lives, he’ll be president,” someone remarked inside the control room. “And if he dies,” said CBS News president Richard Salant, “we don’t have a camera at the hospital.”

And for two and a half hours, Channel 11 in New York City broadcast nothing but an image of the word SHAME.​ 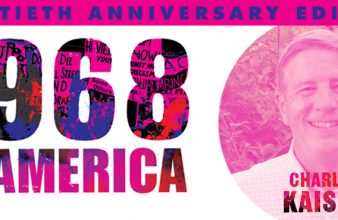 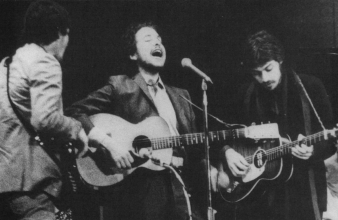 Charles Kaiser, author of 1968 in America, on the return of Bob Dylan 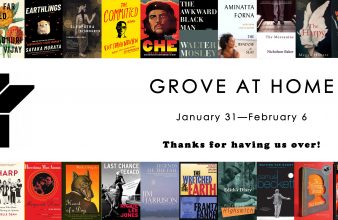