August is Women in Translation Month—a perfect time to feature the following stellar literature-in-translation list, which we suggest you enjoy all year long. From Sayaka Murata’s meteoric rise in the English-speaking world to the sustained influence of world-famous French novelist Marguerite Duras, these women set the tone and change the shape of global literary culture.

Convenience Store Woman / Sayaka Murata / Translated from Japanese by Ginny Tapley Takemori
Keiko Furukura had always been considered a strange child. Working in a convenience store, she finds a predictable world mandated by the store manual. However, at age 36, she is still in the same job and has never had a boyfriend. She isn’t living up to society’s expectations. When a similarly alienated young man comes to work in the store, he will upset Keiko’s contented stasis—but will it be for the better? With some laugh-out-loud moments prompted by the disconnect between Keiko’s thoughts and those of the people around her, Sayaka Murata provides a sharp look at Japanese society and the pressure to conform, as well as penetrating insights into the female mind.

The Core of the Sun / Johanna Sinisalo / Translated from Finnish by Lola Rogers
Johanna Sinisalo is a master of literary speculative fiction and of her country’s unique take on it, dubbed “Finnish weird.” Set in an alternative historical present, in a “eusistocracy”—an extreme welfare state—that holds public health and social stability above all else, this novel follows a young woman whose growing addiction to illegal chili peppers leads her on an adventure into a world where love, sex, and free will are all controlled by the state. A tautly told story of fight and flight, this is also a feisty, between-the-lines social polemic—a witty, inventive, and fiendishly engaging read.

Daughter of the River / Hong Ying / Translated from Chinese by Howard Goldblatt
Acclaimed around the world, Daughter of the River is both a compelling self-portrait by a remarkable writer and an unforgettable exposé of life at the bottom of Chinese society. Growing up in a slum on the bank of the Yangtze River, Hong Ying was constantly aware of the sacrifices her family made so that she would survive. As she neared her eighteenth birthday, she was determined to unravel the enigmas that had troubled her all her life: a stalker shadowing her since childhood, an anomalous record in her father’s government file, and an unshakable feeling that she was an outsider in her own family. At the same time, she began a relationship with a history teacher at her school, who awakened her to the possibility of dissent and to her own emerging womanhood. But, as she learned, the truth cuts both ways.

Destroy, She Said / Marguerite Duras / Translated from French by Barbara Bray and Helen Lane Cumberford
We’ve published a number of works by French literary great Marguerite Duras, author of, among other works, The Lover and the screenplay for the film Hiroshima, Mon Amour. In Destroy, She Said, erotic intrigue masks a chillingly deceptive form of madness. Elisabeth Alione is convalescing in a hotel in rural France when she meets two men and another woman. The sophisticated dalliance among the four obscures an underlying violence, which, when the curtain of civilization is drawn aside, reveals in her fellow guests a very contemporary, perhaps even new, form of insanity. As a bonus, this volume includes an in-depth interview with Duras by Jacques Rivette and Jean Narboni.

The Piano Teacher / Elfriede Jelinek / Translated from German by Joachim Neugroschel
Set in a late 1980s Vienna rotting under the weight of its oppressive, outmoded cultural ideals—a Vienna mirrored by the heroine’s own repressed dreams—The Piano Teacher creates a shocking, angry, aching portrait of a society stubbornly fabricating its own obsolescence. Erika Kohut, piano teacher at the prestigious Vienna Conservatory, is a quiet woman in her mid thirties devoted to Bach, Beethoven, Schumann, and her domineering mother. Enter Walter Klemmer—handsome, arrogant, athletic, out to conquer the secret of art and Erika’s affections with all the rancid bravado of youth—and suddenly the dark and dangerous passions roiling under the piano teacher’s subdued exterior explode in a release of sexual perversity and long-buried violence.

Purge / Sofi Oksanen / Translated from Finnish by Lola Rogers
Sofi Oksanen’s award-winning novel Purge is a breathtakingly suspenseful tale of two women dogged by their own shameful pasts and the dark, unspoken history that binds them. When Aliide Truu, an older woman living alone in the Estonian countryside, finds a girl huddled in her front yard, she offers her shelter. Zara is a young sex-trafficking victim on the run from her captors, but a photo she carries makes it clear that her arrival at Aliide’s home is no coincidence. Survivors both, Aliide and Zara engage in a complex arithmetic of suspicion and revelation to distill each other’s motives; gradually, their stories emerge, the culmination of a tragic family drama of rivalry, lust, and loss played out during the worst years of Estonia’s Soviet occupation.

Hotel Silence / Auður Ava Ólafsdóttir / Translated from Icelandic by Brian FitzGibbon
Told with grace, insight, and humor, Hotel Silence is the story of one man’s mid-life adventure of self-discovery. On the cusp of turning fifty, divorced, adrift, Jónas Ebeneser has recently discovered he is not the biological father of his daughter, Gudrun Waterlily, and he has sunk into an existential crisis. Armed with little more than his toolbox and a change of clothes, he flies to an unnamed country where the fumes of war still hover in the air. He books a room at the sparsely occupied Hotel Silence, in a small town riddled with landmines and the aftershocks of violence, and there he comes to understand the depths of other people’s scars while beginning to see his wounds in a new light.

Kitchen / Banana Yoshimoto / Translated from Japanese by Megan Backus
Banana Yoshimoto’s dazzling English-language debut Kitchen is a perfect introduction to this bestselling Japanese author’s extensive body of work, much of which is available in English. Kitchen juxtaposes two tales about mothers, love, tragedy, and the power of the kitchen and home in the lives of a pair of young women in contemporary Japan. Mikage, the heroine of “Kitchen,” is an orphan raised by her grandmother, who has passed away. Grieving, Mikaga is taken in by her friend Yoichi and his mother (who is really his cross-dressing father) Eriko. As the three of them form an improvised family that soon weathers its own tragic losses, Yoshimoto spins a lovely, evocative tale with the kitchen and the comforts of home at its heart.

The White City / Karolina Ramqvist / Translated from Swedish by Saskia Vogel
A celebrated bestseller in Sweden, and the winner of the prestigious Per Olov Enquist Literary Prize, The White City is an arresting story of betrayal and empowerment. Karin knew what she was getting herself into when she fell for John, a high-flying wheeler-dealer. But she never imagined things would turn out like this: John is gone and so are the coke-filled parties, seemingly endless flow of money, and high social status. All that remains of Karin’s former life is the mansion John bought for her—and their baby daughter, Dream. With slow-burning psychological intrigue and a seductive atmosphere, The White City is an intimate portrayal of one woman’s struggle to pull herself up from the paralyzing depths of despair and an unflinching examination of what it means to lose control. 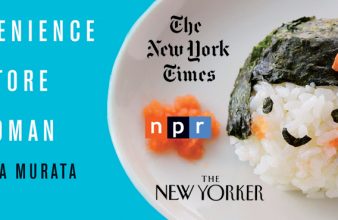