Last month, the amazing Roxane Gay got together with journalist Soledad O’Brien for an online conversation hosted by the 92nd Street Y. They touched on a wide range of topics, including overcoming shyness, the relationship between writing and trauma, and, of course, Twitter (“Early on, it was this idea that I could be at a cocktail party but in my pajamas. I had to really start to think about the economy of language, and that was really exciting.”). Check it out!

If you missed it last month, now’s a perfect time to catch up on this remarkable story from Fire Sermon author Jamie Quatro — a native Arizonan who, as she writes in this fantastic Travel and Leisure cover story, had never been to the Grand Canyon, until meeting up there with her brother for a hike to the heart of the natural wonder, a full mile deep. With some thoughts on feminist architect Mary Elizabeth Jane Colter, encounters with smug-advice-dispensing stoners, and much more.

“You learn quickly on the trails, not to ask questions of passing hikers. They’re on the way up, working hard to summit before the heat of the day. You also end up with conflicting information. My brother Johnny, who planned our rim-to-rim hike of the Grand Canyon, had just learned that part of the North Kaibab Trail was washed out. It’s a treacherous section, a narrow cliffside pass with a steep drop on one side.” Continue reading…

To close out the week, here’s another electrifying performance from the legendary Rickie Lee Jones, whose memoir Last Chance Texaco we published on Tuesday! Here’s Rickie Lee performing “Gethsemane” off her 2007 album The Sermon on Exposition Boulevard at the UK’s “Celtic Connections.”

Today we’re wishing an exceedingly happy seventieth b-day to the amazing Bradford Morrow! Brad is so many things — the founder and editor of Conjunctions, a driving force in contemporary literature across any number of genres, and the fiercely admired author of more than fifteen books, including poetry and fiction collections and nine novels. Here, from last October, is some fantastic video of Morrow in virtual conversation with curator Chris Semtner of the Richmond, VA-based Poe Museum. The pair met to discuss Brad’s most recent novel, The Forger’s Daughter, whose action revolves partly around a first edition of Edgar Allan Poe’s Tamerlane, the so-called “Holy Grail of American letters.”

Next week, we are just unbelievably excited to publish Open Water, the gorgeous debut novel by Caleb Azumah Nelson. If you’d like to get a sense of why, please do not delay in reading Lauren Christensen’s utterly wonderful profile of Caleb for the New York Times, published yesterday. It is, simply, the greatest. 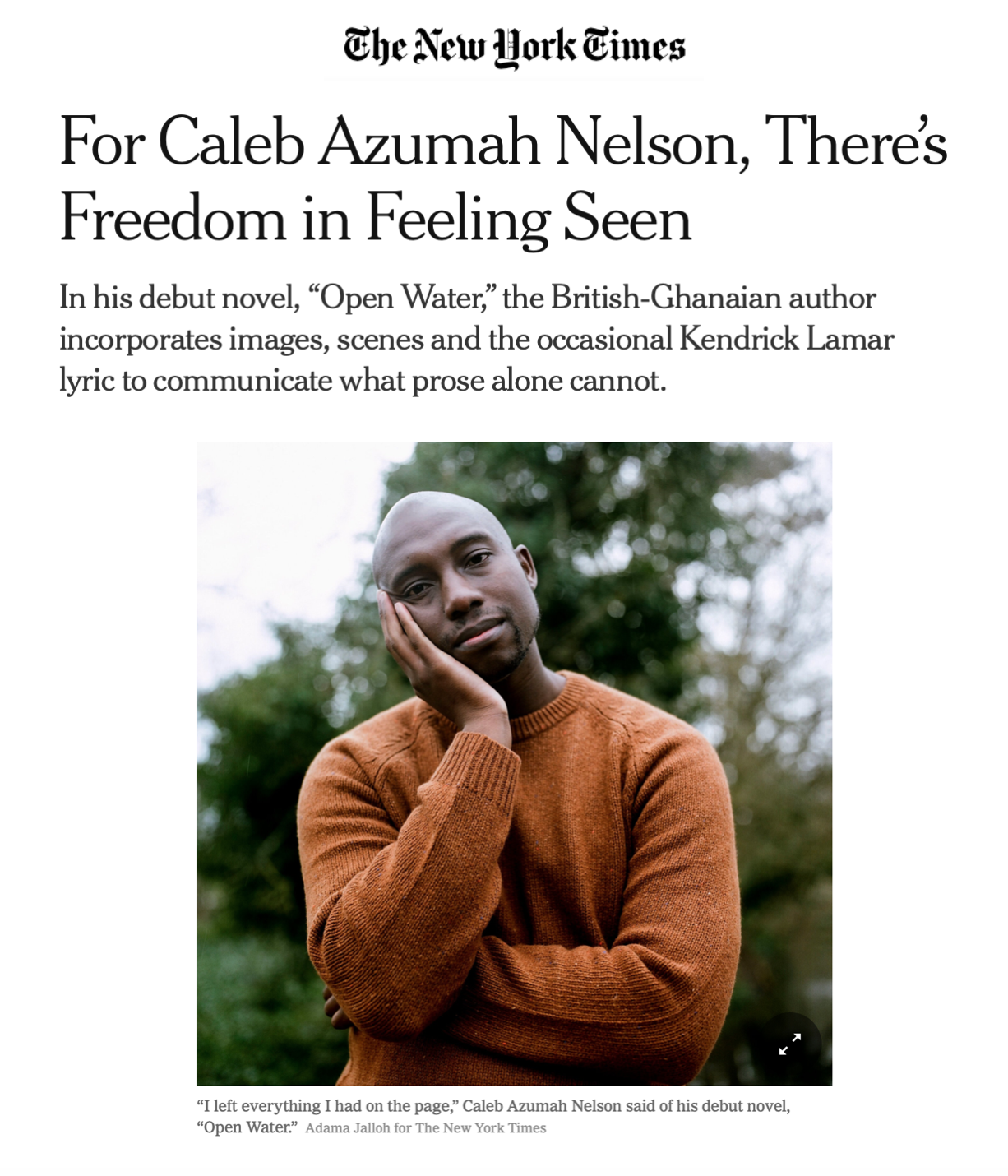 “To read Azumah Nelson’s own fictional portrait — Black Cat, a Grove Atlantic imprint, releases his debut novel, ‘Open Water,’ in the United States on Tuesday — is to sit with a similar kind of synesthesia. In prose interspersed with a Kendrick Lamar or A Tribe Called Quest lyric here, a scene from “Moonlight” or a Roy DeCarava photograph there, the unnamed narrator tells a story of falling in love, and then fighting to stay there.” Continue reading…

Allen Ginsberg does the Meditation Rock

There’s never a bad time for this rollicking, sweet, and slightly eccentric video of the legendary Allen Ginsberg, with a world-class backing band, singing about the value of meditation. “It’s never too late to do nothing at all!”

Today we’re wishing a deliciously happy birthday to the one and only Thom Eagle — chef, fermenter, genial Twitter wit, and author of the glorious, sui generis First, Catch, the “cookbook without recipes” that Mark Haskell Smith, writing in the LA Times, praised for a “sharpness that can turn a chapter on fermenting pickles into a riff on death and decay while still making it seem like something you would like to put in your mouth.” Given the impossibility of an actual birthday party, we’re celebrating by watching this discussion Thom had with colleague Joe McNamee for the 2019 West Cork Literary Festival.  The whole conversation is delicious, and highly recommended.

The Sympathizer: Coming to a TV near you

Viet Thanh Nguyen probably sleeps… but it’s hard to imagine how he finds the time. Barely a month after the release of his New York Times-bestselling The Committed, Viet is the subject of some utterly grand news — The Sympathizer, his Pulitzer Prize-winning debut novel (and the book to which The Committed is the long-anticipated sequel), has been optioned by A24 and Rhombus Media, who are adapting it to a TV series! Excitement, anticipation, and casting ideas abound. Here, at Deadline, is Alexandra Del Rosario with the complete story.

“A24 and Rhombus Media have optioned the rights to Viet Thanh Nguyen’s The Sympathizer and are developing the author’s Pulitzer Prize-winning debut novel for a television series.

“Published in April 2015, The Sympathizer centers on a half-French, half-Vietnamese man who served as a spy for Communist forces during the Vietnam War. The novel follows the unnamed protagonist as he experiences the final days of the historical war, lives in exile in Los Angeles and continues to move throughout Southeast Asia.” Continue reading…

It’s never a bad time to hear the Pulitzer Prize- and National Book Award-winning poet Mary Oliver. When Oliver passed away a little over two years ago, she left behind a remarkable legacy of poetry that, in plainspoken, unpretentious language expresses awe at the beauty of the natural world and wonder at humanity’s place within it. Here’s Oliver reading one of her most beloved compositions, “Wild Geese,” from her acclaimed 1986 collection Dream Work.

Today’s the day! After nearly a year of anticipation, we are over the moon to finally release Last Chance Texaco, the no-holds-barred memoir by rock legend Rickie Lee Jones. It’s an exhilarating read that O, the Oprah Magazine calls “tender, fierce, intimate,” and that Mojo praises for Jones’s “absorbing storytelling, facility with language (no surprise there) and her fealty to integrity — commerce be damned.” To celebrate, here’s the fantastic book trailer, followed by a few excellent Rickie Lee performances. Don’t forget to check her tour schedule and order your copy today!

First of all, watch the book trailer!

After months of waiting, tomorrow’s the day: we finally publish Last Chance Texaco, the unflinching memoir from music legend Rickie Lee Jones! What better way to get ready than with Rickie Lee’s appearance with Scott Simon on NPR’s Weekend Edition last Saturday! The two discuss everything from young Rickie Lee’s being treated like she had a cooties to “the gift of aging in [the music] business.” Listen right here:

Marie Buck on My Dinner With Andre

A few weeks ago, the American poet Marie Buck held a conversation with two UK-based colleagues, Maria Sledmere and Mau Baiocco, about their recent book Unsolved Mysteries. It’s a fascinating conversation that covers a number of topics — including Frank O’Hara’s habit of misreporting his own astrological sign, Buck’s recent inability to stop reading Thulani Davis, and a dynamic appraisal of Louis Malle’s My Dinner With Andre. The conversation, printed in two parts at Spamzine, is utterly worth reading.

“The movie has a sort of naturalistic, low-budget vibe; it’s set in New York and it’s almost semi-biographical — like Wallace Shawn and Andre Gregory are acting, but they’re acting their own lives, and it’s just the two of them sitting in a restaurant talking back and forth. It’s a really great film; I found it incredibly charming stylistically and also like that it returns to the Wallace Shawn character’s money troubles over and over again. But anyway: Andre Gregory’s character talks mostly about these more ‘authentic’ experiences he’s had outside of New York. And in this movie the people in New York are kind of fake and bourgeois and bad. Andre Gregory’s character feels alienated from them; he has more authentic experiences outside the country. Western culture as a whole is presented as fake and mediated and bad. When I was watching the movie, I was like ‘oh this is such a crystallisation of this culture coming out of countercultural moment in the sixties.’” Continue reading…

Siskel and Ebert on My Dinner with Andre

A few months ago, on Wallace Shawn’s 77th birthday, we checked in with some more recent footage of him and Andre Gregory. Today, let’s look at this 1981 TV spot in which Siskel and Ebert review the movie’s original release — with plenty of clips to keep it interesting. “These are not cornball attempts at approximating human emotions.” No, they are not. 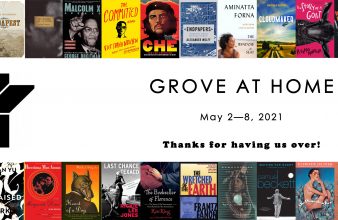