“This is not an aberration”: Roxane Gay on the 2020 election

With the results of this week’s momentous election coming, at its own pace, into focus, we can finally begin thinking through what they have to tell us about the state of political life in America. Who better to lead us in that thinking-through than the remarkable Roxane Gay? In an op-ed in today’s New York Times, Gay — increasingly one of America’s most looked-to public intellectuals and a vibrantly intelligent commenter on politics and race — breaks down her thinking on what we know so far. It is an urgent, sobering read. 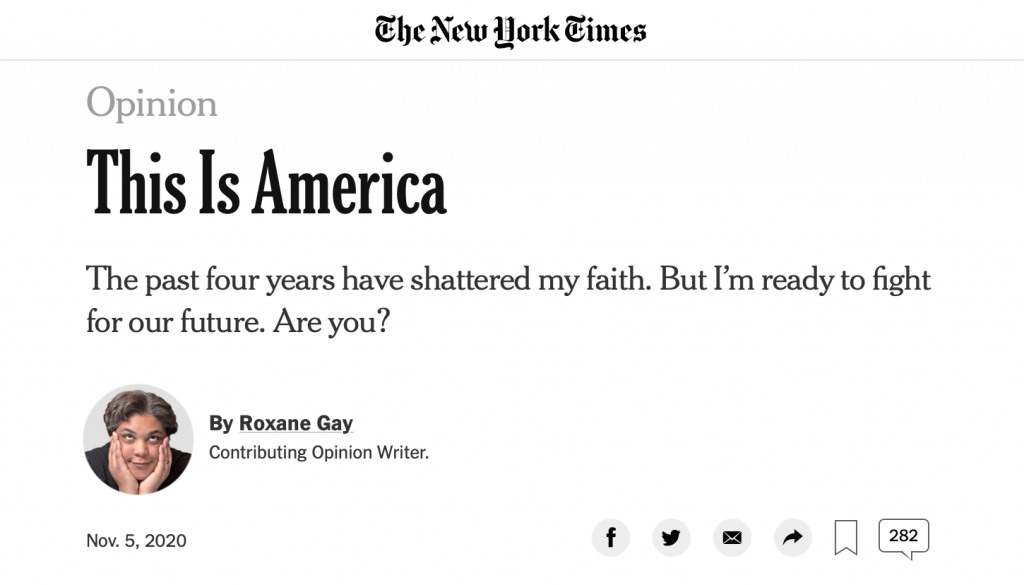 “Joe Biden appears poised to win the presidency, but his win will not be a landslide. And that’s fine. A win is a win and the margin of that win only sweetens the victory. Democrats can and should celebrate this win if it does, indeed, come to pass.” Continue reading…

Wilmington’s Lie and the history of American voter suppression

One factor that has played an unusually dynamic, and deeply troubling, role in the election currently winding down is voter suppression. In the new issue of the New York Review of Books, Pulitzer Prize-winning historian David W. Blight reviews Wilmington’s Lie, by Pulitzer Prize-winning journalist David Zucchino, noting among many other things how starkly we can see contemporary efforts at curbing citizens’ exercise of the franchise presaged in the chilling events that convulsed the city of Wilmington, NC in 1898, when it became the scene of the only successful coup ever carried out on American soil. Declaring Zucchino “a marvelous writer,” Blight notes that “one feels [voter suppression’s] treacherous legacy on nearly every page.” An urgent, timely read.

“But the coup in Wilmington, North Carolina, in November 1898 may deserve first place in this nineteenth-century gallery of horrors. That month there was a concerted, carefully planned, and successful effort to violently suppress the black vote, eliminate black elected officials, and restore white control of the city of Wilmington, as well as the entire state, to the Democrats for the cause of white supremacy. Leaders of the coup employed tactics ranging from vicious newspaper propaganda and economic intimidation to arson and lynching. Dozens of African-Americans were killed and black political life in the area was snuffed out in a matter of days: 126,000 black men were on the voter rolls of North Carolina in 1896; by 1902, only 6,100 remained.” Continue reading…

According to scientists, it’s been the longest week in American history. An excellent reason to his the weekend running, with the dark exuberance of “Witches vs. Wolves,” by the post-punk powerhouse S-S-S-Spectres — featuring, on drums, the wonderful Leni Zumas.

A few things to take your mind off the vote tally

It’s a tense morning, as we all eye ongoing vote tallies in Alaska, Arizona, Georgia, Nevada, North Carolina, and Pennsylvania. Here are a couple of short, light-hearted videos, written by or starring our authors, to help take your mind elsewhere for a few minutes — refreshing that feed isn’t going to bring us final results any faster.

Jesse Eisenberg on working with Scott Baio and Elizabeth Berkley

A scene from “Shakespeare in Love”

Edward Luce on How to Fix Democracy

Edward Luce is no newcomer to the workings of American democracy — a longtime Washington columnist for the Financial Times, he has also worked as a speechwriter to former Treasury Secretary Lawrence Summers, and his 1993 book Time to Start Thinking has proved an extraordinarily prescient view of America’s political and economic decline. Here he is last year, discussing the relationship between economic conditions and political behavior. As we all continue to await the electoral results with clenched teeth, there’s a lot here worth hearing.

Roxane Gay on race in America, the prospect of a Trump re-election, and more

We can all agree with the magnificent Roxane Gay when she says, “2020 has been a year that has been entirely overwhelming and honestly, I feel really hopeless and helpless.” In this interview with the CBC last month, Roxane opens up to Martine St-Victor and Isabelle Racicot about the racial reckoning currently underway in American publishing, the possibility of meaningful change, and what will happen if Donald Trump is re-elected — a question that, as the nation holds is collective breath in anticipation of the election’s results, has only grown more urgent. 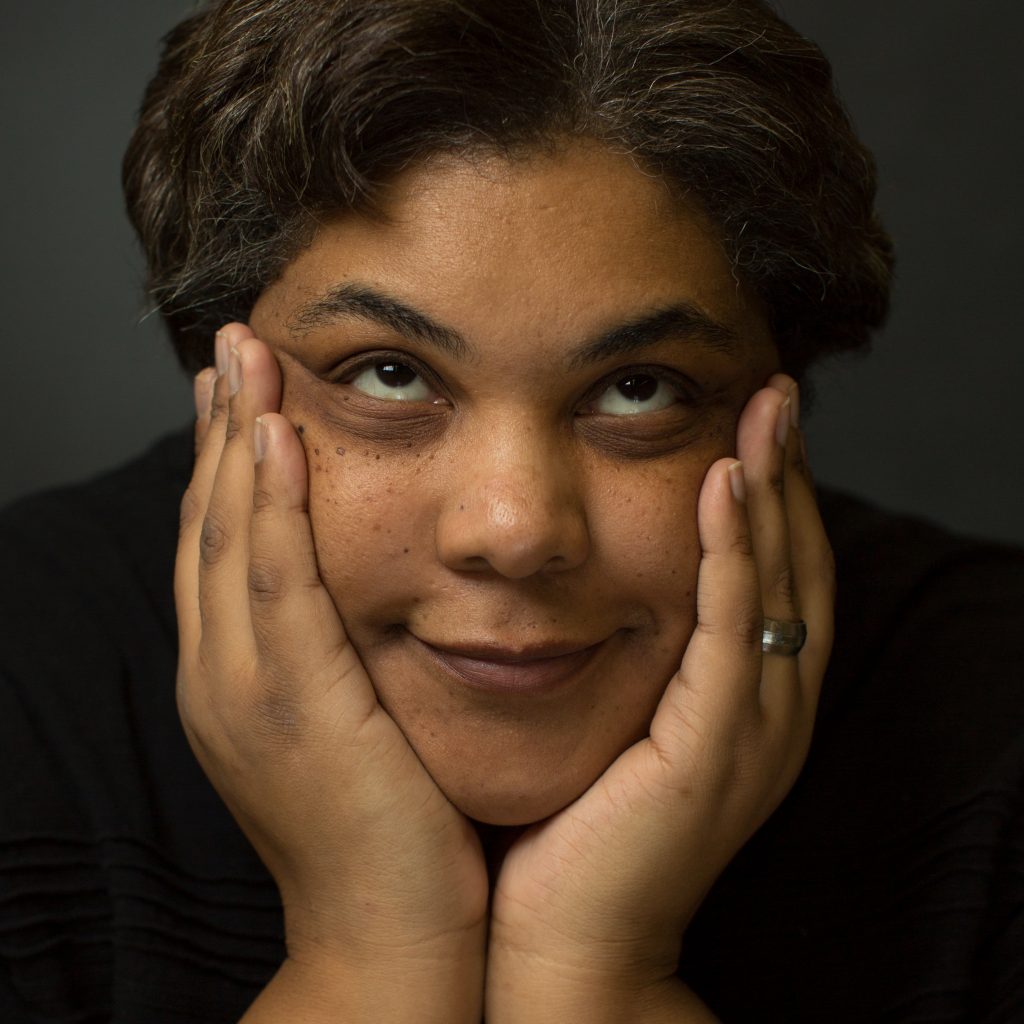 “There are no two sides to racism — either you’re racist or you’re not. Either you think people of colour are human or you don’t. To see them entertain this and call it objectivity is so frustrating. And I do think that we have to have hope. We have to believe change is possible. Otherwise, what are we doing? But I don’t know how we do it, how every day we still have hope that things will get better, when there’s so much overwhelming evidence against it…” Continue reading and listen to the full interview…

In an age of extreme political views, we often encounter the view that satirizing politicians takes them down a peg, cuts them to size. In this clip, filmed a few years before Boris Johnson’s rise to the UK prime ministership and early in Donald Trump’s presidential term, John O’Farrell takes the opposite view: that satirizing politicians with extreme views helps them, showcasing their ability to take a joke and offering a platform where listeners encounter those views with their guard down. Agree or disagree, O’Farrell knows whereof he speaks: he’s one of the UK’s best-selling satirists himself, a former joke-writer for Tony Blair and keen observer of British and American political culture.

It’s Election Day! With tensions running high in all directions, we’d like to offer this, today, as a space to relax and enjoy some media that’ll help get you through. So, first of  all, if you haven’t voted yet, vote. And when that’s done, here are some songs that’s calming, inspiring, or just plain nice, to help us all get through the long hours till tomorrow.

Steve Martin and the Steep Canyon Rangers, “So Familiar”

When nearly all the pundits and pollsters called the 2016 presidential election wrong, one man — American University history professor Allan J. Lichtman — called it right. As we noted back in August, Lichtman, using a system of his own device called “keys to the White House,” has accurately called every U.S. presidential election for the past forty years. With Election Day tomorrow, today seems a good time to revisit this New York Times video from the summer, in which Lichtman breaks down his predictions for the 2020 election, forecasting a winner based on his “keys.” Watch this — and if you haven’t yet, be absolutely sure to vote by tomorrow.

Michael Bennet speaks fire on the floor of the Senate

With the election finally winding down tomorrow, we’re remembering one of our favorite voices from this long, strange campaign cycle — Michael Bennet, the senior US senator from Colorado, and the author of The Land of Flickering Lights, which the Daily Beast called “a campaign book, yes, but… a smart and substantive one.” While he did not clinch the Democratic nomination for the presidency, his fighting spirit, big ideas, and call to each of us to become “founder” live on, as he remains a crucial, eloquent voice in the senate. Today, we’re looking back on this impassioned moment from early 2019, when Bennet took the floor with uncommon forcefulness, to decry Texas Republican Ted Cruz’s position on the then-ongoing government shutdown.

Today would have been the seventy-eighth birthday of Shere Hite, the pathbreaking feminist sexologist who passed away earlier this fall. Over her distinguished career, Hite became arguably the world’s foremost authority on women’s sexuality and its interactions with larger social structures; she also, in 1995, became a citizen of Germany, renouncing the US citizenship into which she was born. Writing that “the tragedy for the US is that it has lost its leadership as a beacon of idealistic democracy,” in a 2003 essay at the New Statesman, Hite spelled out her decision to become a European, and what it had meant for her and her work. Today, nearly two decades later, it reads as profoundly clear-eyed about both the past and the future. 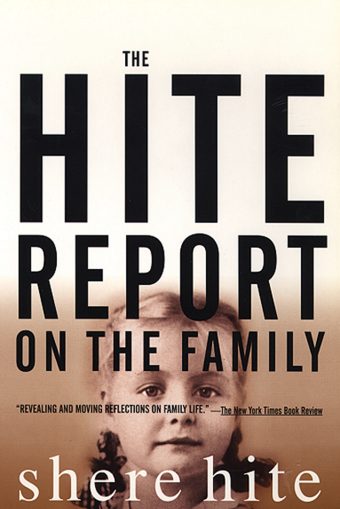 “I renounced my US citizenship in 1995. After a decade of sustained attacks on myself and my work, particularly my ‘reports’ into female sexuality, I no longer felt free to carry out my research to the best of my ability in the country of my birth. The attacks included death threats delivered in my mail and left on my telephone answering machine. A statement issued by 12 prominent American feminists, including Gloria Steinem, Barbara Ehrenreich and Phyllis Chesler, described the media assaults on me as part of a ‘conservative backlash… not so much directed at a single woman… as… against the rights of women everywhere’.” Continue reading…