The best of the 13 stories in Olivia Clare’s debut collection flout convention and work in mysterious ways. Two in particular — “Pétur” and “The Visigoths” — will probably be anthologized and taught and cherished for years to come. They’re so well crafted, in fact, that the rest of “Disasters in the First World” pales in comparison. But even the lesser entries manage to flicker with moments of rare insight and nuance.

Two stories  in particular will probably be anthologized and taught and cherished for years to come.

Clare, who is also the author of a collection of poems, has won a Rona Jaffe Foundation Writer’s Award and a Ruth Lilly fellowship from the Poetry Foundation, among other distinctions. “Pétur,” unsurprisingly, won an O. Henry Prize. Its central characters, Laura and Adam, a mother and son, are trapped in a remote Icelandic village as a result of the Eyjafjallajokull volcanic eruptions that disrupted airline travel in Europe in 2010. “By the third morning,” Clare writes, “ash from Eyjafjallajokull coated the porch, the porch rail, the seats of the porch chairs and the rented station wagon.” The repetition subtly hints at Laura’s increasingly manic state of mind.

In their isolation, Adam watches his mother grow more eccentric, perhaps even deranged. “She was talking to herself — he’d caught her doing this before, at the cabin, washing her hands at the sink … and singing to no one, without words, cooing. Sometimes he thought she was too forgetful and scattered, too unpredictable.” Many debut writers would pound us over the head with the Meaning and Symbolism of this situation, but Clare handles the resonances between the spooky weather and Laura’s deterioration with admirable restraint.

by Olivia Clare for the New York Times

Read the rest at The New York Times Book Review > 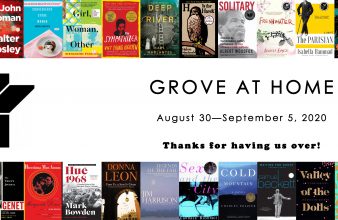