If you’ve been keeping up with us in recent months, you know we’ve been having a blast celebrating the singular Rickie Lee Jones, whose music remains vital and distinctive more than forty years into an astonishing career, and whose memoir, Last Chance Texaco, has been garnering critical praise — most recently from Let’s Talk About Love author Carl Wilson, who writes at Bookforum, “Her recollections are as vividly cinematic as her best lyrics, with the same heightened conversational rhythms. As in many of her songs, stories tend to resolve via an agnostic mysticism, an ‘invisible world’ somehow watching out for her.” Here’s the video to her song “The Real End,” off the 1984 album The Magazine.

B.B. King sings “Just a Little Love” and “How Blue Can You Get”

If you’ve been following us, you also know how excited we are to publish King of the Blues, the first serious book-length biography of blues legend B.B. King, coming from acclaimed author Daniel de Visé this fall. Here — at Daniel’s own recommendation! — is some incredible footage of King singing “Just a Little Love” and “How Blue Can You Get” in 1970.

There is absolutely no such thing as a bad time to hear Frank O’Hara reading his poetry, which changed America’s literary landscape forever.

Viet Thanh Nguyen on his dad: “In your 87 years, you have lived an epic life”

If you missed it over the weekend, here’s another chance to watch Viet Thanh Nguyen’s appearance on CBS News to talk about his dad. True to Viet’s work, it’s brilliant and moving, a sincere and powerful filial reflection on an astonishing life.

This #AAPIMonth, Pulitzer Prize-winning novelist @viet_t_nguyen reflects on his father’s journey from Vietnam to America and the hardships he endured during that time. pic.twitter.com/UPzCcCiRD8

“When my parents talked about Americans, they meant other people, not us, but I felt American, as well as Vietnamese. My parents could use ‘Oriental’ without self-consciousness, but I could not. Something struck me as wrong about that word, but I didn’t know what it was until I studied Asian American history and literature at the University of California, Berkeley. There I learned about the Chinese Exclusion Act, the internment of Japanese Americans, the colonization of the Philippines, the annexation of Hawaii, the often forgotten presence of Korean and Indian immigrants in the early 20th century, the signs that said ‘No Dogs or Filipinos Allowed’ and the experiences of Vietnamese, Cambodian, Laotian and Hmong people during and after the Indochina wars.” Continue reading…

Roxane Gay on policing at Pride: “Our history is young, and we have not forgotten it”

Last week, we made some waves with the announcement that the great Roxane Gay is starting an imprint, Roxane Gay Books, that we’ll have the pleasure of publishing. No sooner had this news broken the internet than we saw Roxane making a splash again — this time with a powerful opinion piece in the New York Times, addressing the question of whether police belong at this year’s Pride parade. Wherever you stand on this issue, Roxane’s voice is one you should not, under any circumstances, miss out on hearing.

“Over the past 50 years, Pride has evolved. At times, it feels unrecognizable because it has gone so mainstream. It has taken on the feel of a holiday, but with corporate sponsorship. What began in New York City is now celebrated in cities all across the world. Pride is a month of marches, parties and events. The celebrations are dynamic and broadly inclusive. Straight allies bring their children. Queer people bring our children. I love seeing how Pride has grown, but it sometimes feels as if we have forgotten who Pride is for. And it is frustrating that some corporations have commodified it, drenching their marketing materials with rainbow colors but doing little to celebrate and support the L.G.B.T.Q. community during the rest of the year. Nonetheless, at its best, Pride celebrations continue to offer space for us to know we belong to a community in which we are embraced for who we are.” Continue reading…

Today would have been the 88th birthday of Charles Nesbitt Wilson, the twelve-term US Representative from Texas’s Second District whose role arming the Mujahideen of Afghanistan in their war against the Soviet Union was explained with journalistic precision in newsman George Crile III’s Charlie Wilson’s War, a book Dan Rather called “amazing, mesmerizing,” noting that “Tom Clancy’s fiction pales in comparison.” The story reached its widest audience yet in 2007, when Hollywood legend Mike Nichols made what would be his final film by adapting Crile’s reporting for the big screen, with Tom Hanks playing Wilson and Philip Seymour Hoffman as Wilson’s pivotal CIA contact Gust Avrakotos. Here, from 1983, is remarkable footage of Wilson, before the story was widely known, discussing his work on Texas TV, and calling the anti-Soviet struggle in Afghanistan “one area in which the good guys are winning, believe it or not.”

Recently, The Flamethrowers author Rachel Kushner sat down for a Zoom chat with the legendary Francisco Goldman, author, among other books, of Say Her Name, The Art of Political Murder, and the brand-new, fiercely acclaimed novel Monkey Boy. A storm in Mexico City had knocked out power to Goldman’s home, but he proved indefatigable, dialing in by cell phone and reading from the book by flashlight. Later, Kushner sent Goldman the questions she’d prepared by email, to allow him to give fuller responses; the resulting conversation, published today at Literary Hub, is unmissable. (And of course we love the shout-out to Goldman’s bestie — and Grove Atlantic labelmate — Jon Lee Anderson.)

“Look, someone who grew up with a father like mine, with a childhood and adolescence like mine, is never going to feel particularly at ease around more typical varieties of American men, especially hetero white men, that’s been my story from long before that became a somewhat fashionable thing to say. White American dudehood, in general, is just something I don’t enjoy being around. Yes, of course, you encounter many exceptions; my so called ‘bestie’ since we first hung out in El Salvador in the 80s, the journalist Jon Lee Anderson, is obviously a tough guy, but one of the things that we shared from the start was our mutual dislike of the macho male American-Brit correspondent herd that I always stayed away from.” Continue reading…

A tribute to John Rechy

This past March, we celebrated another birthday for legendary author John Rechy — whom James Baldwin once praised for his “rare and beautiful recklessness.” As the publisher of fifteen of Rechy’s books, including the epochal City of Night, we’re certainly tremendous fans! Today, whether the occasion is the start of Pride Month, the 95th birthday of Marilyn Monroe (who figures crucially in Rechy’s Marilyn’s Daughter), or simply the fact that it’s never a bad time to celebrate Rechy’s indelible work, here’s a video produced last year by the Texas Institute of Letters to honor him. 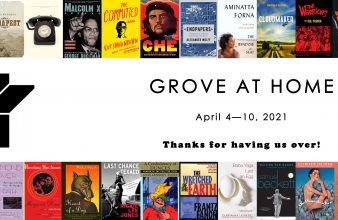