An interview without words, starring (who else?) Samuel Beckett

Yesterday, the brilliant bibliophages of Literary Hub shared something truly wonderful: video from a 1969 interview Samuel Beckett, fresh off winning the Nobel Prize in Literature, gave to a Swedish TV crew. Beckett had only only stipulation: there was to be no speaking. The resultant clip is… everything. True to form, Beckett manages to convey a surprising amount of personality without uttering a word.

We haven’t been shy about it: we’re positively furious with enthusiasm about The Committed, Viet Thanh Nguyen’s blisteringly-anticipated sequel to his Pulitzer Prize-winning, globally bestselling, new-genius-on-the-literary-scene-announcing 2015 debut novel The Sympathizer. After interminable months of waiting to release it, we’re finally within spitting distance: we get to publish The Committed this coming Tuesday, March 2nd! For untold myriads of Sympathizer fans the world over, this is already extremely excellent news (not to mention cause for pre-ordering). For those who have yet to experience the mind-nourishing, pulse-quickening, genre-liquifying splendor of Nguyen’s writing, perhaps Junot Díaz’s extraordinary write-up of The Committed for the New York Times Book Review will help explain the excitement. It is never a bad thing when a review concludes by asking whether book has faults and answering, “Yes, a very big one: The novel ends.”

“Born to a Vietnamese mother and a French father, our narrator is a Communist mole, embedded among the South Vietnamese forces throughout war and beyond. A ‘spy, a sleeper, a spook, a man of two faces,’ he betrays his way from Saigon to Los Angeles and back — only to end up imprisoned in Vietnam, confessing all his sins during his ‘re-education.’ Equal parts Ellison’s Invisible Man and Chang-rae Lee’s Henry Park, Nguyen’s nameless narrator is a singular literary creation, a complete original.” Continue reading…

As we begin to approach the one-year anniversary of COVID lockdowns, it’s a good moment to revisit this video from early in the now-protracted crisis, when the one and only Roxane Gay appeared on Trevor Noah’s “Daily Show” (then newly rebranded as “The Daily Social Distancing Show”) to discuss where we were at, and where we were headed. “I’m… worried about the state of the world and the more vulnerable people in it, because if I find it difficult… people who are living paycheck-to-paycheck and on the margins of society… how are they feeling? I think about that a lot.”

Yesterday would have been the sixty-sixth birthday of Steve Jobs, the visionary co-founder and longtime director of Apple, Inc. who passed away in 2011. In 2018, we published Small Fry, a candid and captivating memoir by Lisa Brennan-Jobs — an astonishing author and memoirist who happens also to be Jobs’s daughter. In this conversation recorded shortly after the book’s release, Brennan-Jobs talks to New Yorker editor David Remnick about the book, her experiences growing up through Silicon Valley’s boom years, and, of course, her enigmatic, renowned father.

This week, we publish The Delusions of Crowds, neurologist and investor William J. Bernstein’s look at why people go mad in large groups. Building on the insights of Charles Mackay’s 19th-century classic Memoirs of Extraordinary Popular Delusions and the Madness of Crowds, Bernstein summons the same spirit of passionate interrogation that marks that book, infusing it with an awareness of the most current biological and sociological research to help explain why we are the way we are. Today, Literary Hub has a thrilling excerpt from the book, examining the dark world of fiction about the Rapture. Take a look. 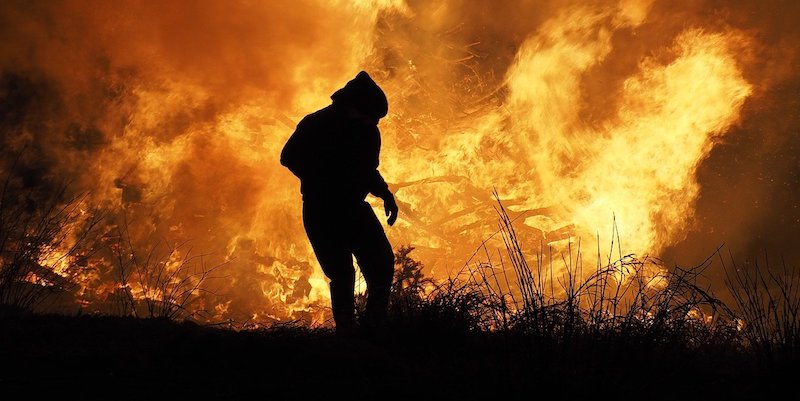 “Kaseph’s allies include a battalion of winged, red-eyed, scaly-skinned, sulfur-breathing demons who suck the will out of ordinary mortals, but are fortunately uniquely vulnerable to the devout, especially Busche. These creatures, though, cannot match the satanic potential of Juleen Langstrat, a feminist professor at the local college who attempts to despoil the religious faith of Hogan’s daughter with courses such as ‘Introduction to God and Goddess Consciousness.’ Kaseph conspires to frame Busche and Hogan, who find themselves in the same cell, compare notes, and join forces to defeat Kaseph and his minions, both inhuman and human.” Continue reading…

Gil Scott-Heron sings “Me and the Devil”

You deserve some music! Here, from his final album, 2011’s I’m New Here, is the miraculous Gil Scott-Heron, performing his twenty-first-century reworking of Robert Johnson’s classic “Me and the Devil Blues.”

Yesterday, the world learned that we’ve lost Lawrence Ferlinghetti, the poet, translator, bookseller, publisher, and activist who had become one of America’s most beloved, accomplished, and influential literary figures. He was, wonderfully, 101 years old. Lawrence’s achievements were myriad: he wrote one of the bestselling books of poetry ever printed, A Coney Island of the Mind; opened America’s first-ever all-paperback bookstore, San Francisco’s City Lights, today, nearly seventy years later, a temple to independent reading, writing, publishing, and thinking; and published numerous books that changed the way America wrote and read, including Allen Ginsberg’s Howl and Other Poems and Frank O’Hara’s Lunch Poems.

Although we don’t publish Ferlinghetti’s writing, Grove’s connections with him run deep. Grove published many of the same authors as Ferlinghetti’s City Lights, including Allen Ginsberg and Frank O’Hara. In 1988, Ferlinghetti moved to have the name of Adler Alley, which ran behind the bookstore, changed to Jack Kerouac Alley, in honor of another author published by both Grove and City Lights. More than two decades later, in his nineties, Ferlinghetti was present for the alley’s festive rededication. Even Ferlinghetti’s book A Coney of the Mind takes its title from a passage in Henry Miller’s Black Spring, which we publish: “Everything is sordid, shoddy, thin as pasteboard. A Coney Island of the mind. The amusements shacks are running full blast, the shelves full of chinaware and dolls stuffed with straw and alarm clocks and spittoons. Every shop has three balls over it and every game is a ball game.”

Here, from Ferlinghetti’s 100th birthday in 2019, is Democracy Now!’s rebroadcast of host Amy Goodman’s interview with him, in which he shares wonderful memories from a long and adventurous life — including the legendary “Gallery 6 Reading” at which Ginsberg first shared his world-changing poem “Howl,” running over to Fidel Castro shortly after the Cuban Revolution to introduce himself despite speaking little Spanish, defending his right to publish “Howl” in court, and much more. He mentions Grove Press repeatedly throughout, and closes with some tough love for poets: “If you can say the same thing in prose, you’ll probably be better off.” Watch it here:

One more thing: we’ve shared these on Instagram and Twitter, too, but here, from our archives, are a few glimpses of the amazing letters Ferlinghetti sent to Grove’s own legendary director, Barney Rosset, in the mid-sixties. Suffice it to say, wonderful as our correspondence often is, we do not receive many notes like these. 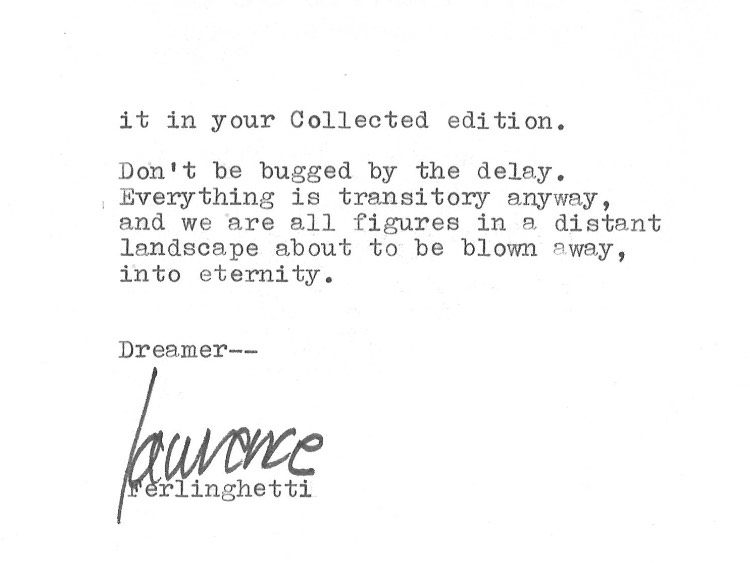 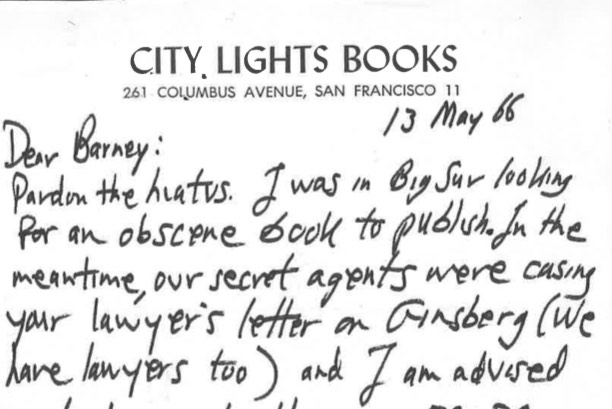 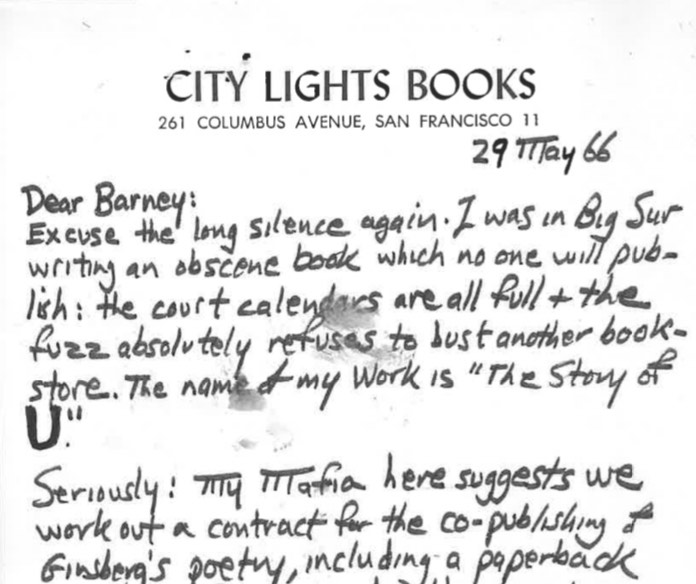 Endpapers trailer: What we know, how we remember, and what it is we find in the end

One week from today, we publish Endpapers, an extraordinary memoir in which bestselling author and longtime Sports Illustrated staffer Alexander Wolff recounts the riveting history of his tempest-tossed family, including his grandfather, the legendary publisher Kurt Wolff — who brought out books by the likes of Franz Kafka and Karl Kraus in his native Germany before fleeing the day after the Reichstag fire, eventually to wind up in New York City and found Pantheon Books — and his father, Niko — who stayed behind in Germany and, despite his own Jewish heritage, fought for the Nazis on two fronts. A mere recounting of events, however, does little to express the profound meditations on history, lineage, freedom, literature, and home that Endpapers weaves into a majestic tapestry. Here, to help in the anticipation, is the book’s trailer. Even if you’re not usually a fan of book trailers, trust us — you’re going to want to watch this one.

Viet Thanh Nguyen: “I wrote it optimistically, thinking there should be hopefully an audience for something like this, and if not, then I’ll create the audience”

Also a week from today, we publish The Committed, Viet Thanh Nguyen’s long-awaited sequel to his Pulitzer Prize-winning debut novel The Sympathizer. As of today, we’re endorsing two particularly urgent forms of anticipation: firstly, you can pre-order the book, and secondly, you can read Alexandra Alter’s outstanding profile of Viet from this weekend’s New York Times.

“In one of Viet Thanh Nguyen’s earliest memories, he is on a boat leaving Saigon.

“It was 1975, and he and his family had been turned away from the airport and the American embassy but eventually got on a barge, then a ship. He can’t remember anything about the escape, other than soldiers on their ship firing at refugees who were approaching in a smaller boat.

“It is Nguyen’s only childhood memory from Vietnam, and he isn’t sure if it really happened or if it came from something he read in a history book. To him, whether he personally witnessed the shooting doesn’t matter.” Continue reading…

Those familiar with Viet Thanh Nguyen’s writing and thinking may already be aware of the concept of “narrative plenitude,” first elaborated in his book Nothing Ever Dies. Nguyen has defined the opposite of narrative plenitude, narrative scarcity, as a situation in which members of a group “feel deprived and must fight to tell our own stories and fight against the stories that distort or erase us.” For a wonderfully nuanced discussion of the concept, you can’t beat this talk Nguyen gave at the Google campus in late 2018.

New revelations about the murder of Malcolm X

Yesterday marked the 56th anniversary of the murder of Malcolm X, the Black American religious and political leader whose contributions to the struggles of oppressed people around the world were halted when a team of gunmen felled him at a speaking engagement in Manhattan’s Audobon Ballroom on February 21, 1965. This weekend, a posthumous letter from New York City police officer Raymond Wood made new allegations that the NYPD and FBI had conspired to facilitate the assassination, ensuring the minister’s usual security detail would be arrested several days before his appearance. Here, from New York’s WABC News, is the story.

Michael J. Stephen on watching newborns sleep amid “the miracle of gas exchange”

After a year in which many around the world felt driven to contemplate the power, mystery, and, indeed, vulnerability of their lungs as never before, last month we published Breath Taking, Dr. Michael J. Stephen’s expert look at the organ that, perhaps more than any other, organizes the distinction between what is inside and what is outside our bodies. Today, in a stirring excerpt from the book published at LitHub, Stephen ruminates on a particular phenomenon many of us have experienced: the compulsion to watch newborn babies sleep. 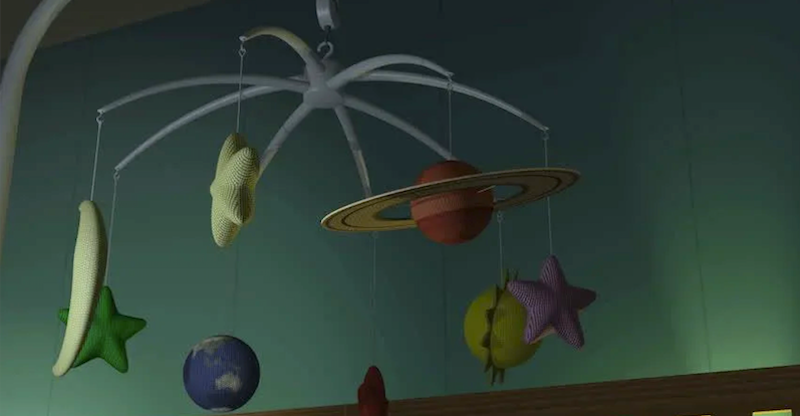 “When we observe our loved ones sleeping, old or young, human or pet, we are instinctively drawn to their breath. There is something essential in it we are all attuned to, something we both automatically and unconsciously equate with life. Each time we check on each other, we are validating the words of the Roman philosopher Cicero, dum spiro, spero, ‘As I breathe, I hope.’” Continue reading…

It’s been about three weeks since we published Milk Blood Heat, Dantiel W. Moniz’s “electric” (Time) debut collection, to fervent critical acclaim. Just about two weeks ago, Dantiel joined How Much of These Hills is Gold author C Pam Zhang for an event hosted by San Francisco’s legendary City Lights Books, at which they discussed the book’s contribution to a contemporary “renaissance of the body,” the ferality of girlhood, and much more. If you’re watching this video and wishing you could have been there live, fear not! Dantiel’s final two tour dates are coming this week — check the schedule here to be sure you don’t miss them 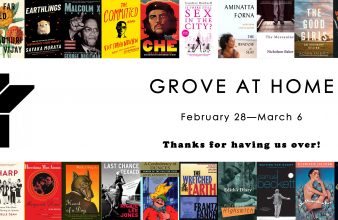