Today would have been the 48th birthday of Nelly Arcan, the pioneering Canadian autofiction writer whose arresting debut novel, Whore, we published in 2005 in an English translation by Bruce Benderson. Whore was an instant sensation, a novel drawn partly from Arcan’s own experiences as a sex worker that Library Journal called “a rhapsody of self-deprecation with notes of anger, defiance, and pragmatism mixed in.” When Arcan died by suicide in 2009 at the age of thirty-six, the Globe and Mail wrote, “Picture Marilyn Monroe at the age of 28 getting short-listed for the Booker Prize and the Dublin IMPAC prize for her first novel. And then writing a second novel that gets nominated for the Dublin IMPAC prize again. Marilyn Monroe crossed with Zadie Smith and — why not? — Colette.” For French-speakers interested in the writer’s world, there are a wealth of interviews with Arcan available online. For those of us looking hoping to learn more about her in English, here’s a trailer for Anne Émond’s biopic about Arcan, Nelly.

There’s never a bad day to read this interview of noted Canadian filmmaker Guy Maddin, the mind behind “Twilight of the Ice Nymphs,” “The Saddest Music in the World,” and other acclaimed and beloved movies, by Ryan Boudinot, author of Misconception and Blueprints of the Afterlife, for the Believer. They talk about the true nature of melodrama, the best way to score a single iconic image for one’s movie poster, and much more.

“RB: Legend has it you were born in a hockey arena. Isn’t this the Canadian equivalent of being born in a manger?

GM: I’ve been told so many different things about my birth. It’s strange, my parents, who never read much, seem to have a real strong sense of legend or myth. I remember once being told I was born on the floor of the beauty salon in which I grew up, and another time that I was born in the dressing room during a game between the Winnipeg Maroons and the Trail Smoke Eaters. I haven’t been able to ever confirm any of this. Another time my family doctor told me I was born at the Grace Hospital, which is this old hospital where Deanna Durbin, a contemporary of Judy Garland’s, was born. I’m happy with any of those birthplaces.” Continue reading…

Just one month from tomorrow, after endless months of anticipation, we’ll finally get to publish Last Chance Texaco, the no-holds-barred memoir from rock legend Rickie Lee Jones. To help you through these last few weeks before you can hold it in your hands — and to wind down the long week — here’s an astonishing live performance of the signature tune that gives the book its title.

Yesterday, we shared book critic Ron Charles’s appearance on “CBS This Morning” last weekend, where he sang the praises of Viet Thanh Nguyen’s The Committed, on sale at last after months of anticipation. Yesterday, viewers of the show got another treat — an astonishingly wonderful clip of Viet being interviewed — social-distancing-style, over Zoom — at a Vietnamese restaurant in LA, with journalist Jan Crawford asking questions from a different Vietnamese restaurant in DC. They talk about Nguyen’s refugee childhood, his relationship with his parents, his view of America’s social progress, and more. The only discernible drawback to any of this appears to be Nguyen’s disappointment at his inability to order squid. But squid or none, it’s entirely worth six minutes of your day.

Two weeks from tomorrow, Kino Lorber will release Chris McKim’s Wojnarowicz, a documentary look at the life of artist and activist David Wojnarowicz. Yesterday, at Entropy, author Lilly Dancyger — the daughter of artist Joe Schachtman, who moved through many of the same circles as Wojnarowicz — shared her thoughts on the film, a review that doubles as a powerful rumination on Wojnarowicz’s walloping art and short, furious life. 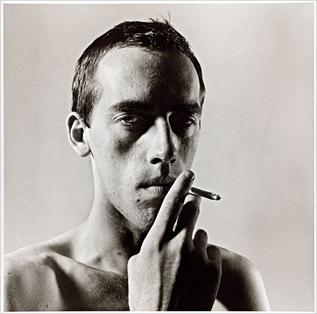 “What ended up making the deepest impression on me while watching Wojnarowicz was not the nostalgia, though, but just how incredibly current and relevant it feels. Wojnarowicz’s magnificent rage—first aimed at the art establishment and the rich people he understood to be the enemy, then later at the government mismanagement of the AIDS epidemic, leaving queer people like himself to die—feels so exactly of this current moment. Or more accurately, it feels needed in this current moment.” Continue reading…

Watch the trailer for Wojnarowicz

If Dancyger’s review has you eager for more Wojnarowicz, in addition to reading his books (including The Waterfront Journals and In the Shadow of the American Dream, which we are proud to publish), and awaiting an epidemiologically sound opportunity to see his paintings, photos, collages in person, you can watch the trailer for Wojnarowicz right here — and can watch the full film on March 19.

Ron Charles talks The Committed on “CBS This Morning”

Yesterday was a big one for the book world: Viet Thanh Nguyen’s The Committed, which the Chicago Review of Books has called “the literary event of the season,” hit bookstores at last. Ron Charles, that peerless dynamo of book criticism, has emerged as one of its most vocal supporters — not only did he offer an absolutely splendid review last week in the Washington Post, he also took to the airwaves this past Sunday, devoting some time on his recurring “CBS This Morning” spot to recommending this “violent, often comic, deeply philosophical novel about the lasting wreckage of colonialism.”

Dr. Michael J. Stephen on “the only major organ in constant communication with the atmosphere”

Just as he was finishing up work on Breath Taking: The Power, Fragility, and Future of our Extraordinary Lungs, one of the first books we had the pleasure of publishing in 2021, Dr. Michael J. Stephen, who had been working on the frontlines of the Covid pandemic, went from doctor to hospital patient, having come down with a severe case of the disease himself. He talks about these experiences — the writing of the book, being treated for Covid, and the fascinating workings of our lungs — in a brand-new interview with Sandy Bauers for the Philadelphia Inquirer.

“On a personal level, being hospitalized amplified the importance of the human touch, of listening to your patient and their story, to being hopeful and upbeat. I felt tremendous guilt as I also passed along the virus to my wife and two young children. Fortunately, we all recovered and can talk about a happy ending. With this, I saw there is mercy in the world. I am determined now to bring that approach I experienced in the hospital to other people.” Continue reading…

Today marks the twenty-fifth anniversary of the death of Marguerite Duras, the author whose books include The Malady of Death and Destroy, She Said, and the screenplay for Alain Resnais’s Hiroshima Mon Amour, as well as the filmmaker behind India Song and Le Camion (which she also starred in, opposite Gérard Depardieu). We’re marking the occasion by watching this conversation between Drifts author Kate Zambreno and translator Emma Ramadan, who recently co-translated Duras’s Me & Other Writing with Olivia Baes. Speaking at the Center for Fiction in fall 2019, the two discuss Duras’s use of nonfiction-writing to revive her own fiction, the complexities of voice over a long career, and much more.

The Committed is on sale today!

Today’s a day that’s been long awaited. Viet Thanh Nguyen’s The Committed — the sequel to his Pulitzer Prize-winning debut, The Sympathizer, is on sale at last. It’s already been widely praised: in the New York Times Book Review, Junot Díaz calls it “incandescent”; in the New Yorker, Jonathan Dee writes, “It’s the voice of the novels that matters, that ramifies, that keeps one reading: the anger, the indictment, the deep, questioning cynicism…” As eager readers everywhere crack open their copies, we’re also remembering this excellent appearance Viet made on Late Night With Seth Meyers in 2017. We’ve shared it once before, but it truly does not get old. For an updated opportunity to be not only astounded by Viet’s writing but charmed by his warmth and riveted by his story, catch him on the virtual tour that begins today, kicking off tonight with an appearance in conversation with Laila Lalami for the Bay Area Book Fest.

Today’s also been long awaited for the release of Endpapers, Alexander Wolff’s remarkable portrait of the twentieth century age of extremes, seen through the remarkable story of his own family, including his grandfather, Kurt Wolff, who founded Pantheon Books and was called “perhaps the twentieth century’s most discriminating publisher” by the New York Times; his father, Niko, who fought for the Nazis despite his own Jewish heritage; and the Merck family, from which Niko was descended on his mother’s side, well-known today through the German pharmaceutical company founded in the seventeenth century that still bears their name. Endpapers is a remarkable read — the Wall Street Journal calls it “an event-filled biography and, along the way, a captivating case study in the challenges faced by refugees attempting to remake a life” — and it also happens to have a remarkable book trailer. We’ve shared this once before, and today, it’s time again.

Today is the 121st birthday of the legendary composer Kurt Weill, well-known for his many collaborations with Bertolt Brecht. Perhaps the best-known of these collaborations, The Threepenny Opera, included a song about a nasty, murderous gangster that has become a jazz standard, a number-one pop hit, and likely the best-known song the two ever wrote together. Here, to supplement some of the versions we shared last month on Brecht’s 123rd birthday, are some more performances of “Mack the Knife”:

It’s March! Spring is on the way! And we’re enjoying this clip of Jesse Ball reading the poem “Lester, Burma” from March Book, his debut poetry collection, which we had the pleasure of publishing in 2004. Irish poet Eamon Grennan praised the book’s “verbally honed, sharply pointed steadiness of purpose”; the Boston Review noted its “otherworldly virtuosity in rendering the uncanny.”

Ferlinghetti in the nineties: “There are still clear choices”

As we continue to process last week’s news that the world has lost singular poet, publisher, and bookseller Lawrence Ferlinghetti, we’re revisiting this 1995 profile of Lawrence that originally ran in the San Francisco Bay Guardian Literary Supplement, and has been re-sharede online by Found SF. Checking in with Lawrence and City Lights co-owner Nancy Peters, writer Brad Wieners gets their thoughts on writers accepting government grants, the fate of the Beat generation, the experience of publishing Allen Ginsberg, and much more. It’s worth reading! 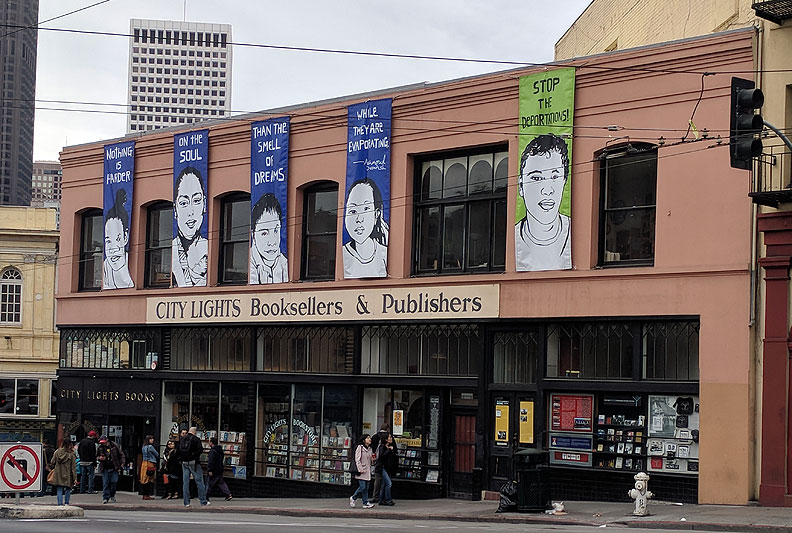 “They are two of the most vital political and literary radicals in North America and as it happens, two of the sweetest people you could ever hope to meet. Granted, my impression might be a bit tainted. Why, after all, would they be hostile to someone coming to do it congratulatory article on their City Lights Pocket Poets Anthology, which arks their 40th year of publishing from 261 Columbus? Even so, their warmth was disarming.” Continue reading…

Ferlinghetti and Ginsberg on “USA: Poetry”

Dating from sixties, this fantastic, half-hour clip finds both Ginsberg and Ferlinghetti at the height of their notoriety, before their reputations among America’s most consequential writers had been cemented. Ginsberg is “credited with returning to American poetry the scope and human compassion of a Walt Whitman, but within the realities of the increasingly disoriented urban experience of today.” Ferlinghetti, it’s noted, is “very much concerned with what is going on in the world today — the very opposite of the popular image of the poet as someone disengaged or removed from reality.” 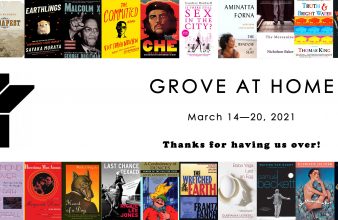