We continue to count the days until we can publish Daniel de Visé’s King of the Blues, the first book-length biography of blues legend B.B. King, this fall. To tide us — and you — over, here’s an electrifying live performance of Three O’Clock Blues.

As we continue to celebrate the excellence that is Rickie Lee Jones’s acclaimed memoir Last Chance Texaco, we’re also enjoying this live 1992 performance of Easy Money, off her self-titled 1979 debut album.

The day is almost upon us — this Monday, the great Bob Dylan turns 80! To celebrate, we’ve released an updated edition of Howard Sounes’s biography Down the Highway, and today we’re listening to the classic performance of his beloved song Mr. Tambourine Man that Dylan gave at the 1964 Newport Folk Festival.

“There’s lots of elements to the Israel-Palestine conflict where it really is quite important to understand references to the past. The other thing I’ve tried to do — and maybe I’ve been over-ambitious — is to tell the story of, and from, both sides. This is a hugely contentious issue, bitterly divisive partisans on each side are constantly at each others throats. And it is unusual, and as I say difficult, to try to give an account where the narratives of both sides are reflected. I’ve tried to do that.” That’s Ian Black, author of Enemies and Neighbors, the definitive history of relation between Arabs and Jews in Palestine and Israel for the century that followed 1917’s Balfour Declaration, discussing the ambit of his book in this short video shot for the London School of Economics and Political Science’s Middle East Centre in 2017. As the current conflict rolls on, Black’s remains a crucial voice in understanding how we’ve gotten where we are, and what may lay ahead.

If you’ve been keeping up with recent book news, you already know that new work from Caleb Azumah Nelson is kind of a big deal. Nelson’s debut novel, Open Water, has been out for just over a month, and it’s already been praised as “achingly tender and intensely moving” (Cosmopolitan UK), with Gabriel Bump writing in the New York Times, “Azumah Nelson’s poetic brilliance, his ability to balance the general and the specific, the ambient and the granular, makes for a salient achievement.” So if you haven’t yet read it, you shouldn’t wait a moment longer before diving into Nelson’s short story “Michael and Zoe, a Love Story,” published by WeTransfer.

“‘This isn’t going how I imagined it.’

“‘Better.’ I don’t know what to do with this, how not to psych myself out, so I’m grateful when a new song starts up. I recognise the opening notes, those quick drum patterns, as does she — Joy and Pain by Frankie Beverly and Maze. As the song progresses, she sings along, matching each note so it’s not just perfect, but hers. I love this song. I love how the first notes you hear are as much an exclamation of joy as they are about tender heartbreak. I’m not much of a dancer. At a house party, I’m more likely to hug my back to a wall than to slide across the expanse of a small dance floor. But I know how to feel, how to surrender to the plucks of a guitar, the croon of a horn, those choruses which speck my arms with goosebumps. Long, soulful cuts like these, where melodies loop and progressions build, take me away, elsewhere.” Continue reading…

It’s a little like something out of a Bob Dylan song: in this short video, music legend and Nobel laureate Bob Dylan sits with Tonight Show host Jimmy Fallon, wordlessly sipping whiskey and watching the Big Apple Circus perform to an otherwise empty auditorium. And when Jimmy gets up to applaud, Dylan is… nowhere to be found. We’re not 100% sure what’s going on here, but we are excited to soak up as much Dylan as we can in advance of his eightieth birthday this Monday — a milestone we’re also marking with an updated reissue of Howard Sounes’s acclaimed biography, Down the Highway, on sale now.

Today would be the 96th birthday of Malcolm X. The anniversary is celebrated as an official holiday — Malcolm X Day — in Berkeley, California, and, at least in a normal year, celebrations of Malcolm’s leadership and legacy are held in cities across the country. Here, from just days before his assassination in 1965, is a fascinating clip of Malcolm appearing on the Canadian quiz show Front Page Challenge, with a panel of then-famous celebrities asking him questions in an attempt to guess a recent headline about him.

Why Sayed Kashua had to leave Israel

With violence in Palestine and Israel continuing to dominate headlines, it’s a good time to revisit Why I Have to Leave Israel, a powerful essay that Palestinian author Sayed Kashua published in the Guardian amid the violence that broke out in there 2014 — with an intensity that had not been matched since, until the events of the past two weeks. Less a direct commentary on the news than a powerful personal narrative of Kashua’s life as a Palestinian intellectual in modern Israel, it makes for powerful reading.

“I wanted to tell, in Hebrew, about my father who sat in jail for long years, with no trial, for his political ideas. I wanted to tell the Israelis a story, the Palestinian story. Surely when they read it they will understand, when they read it they will change, all I have to do is write and the Occupation will end. I just have to be a good writer and I will free my people from the ghettos they live in, tell good stories in Hebrew and I will be safe, another book, another movie, another newspaper column and another script for television and my children will have a better future. Thanks to my stories one day we will turn into equal citizens, almost like the Jews.” Continue reading…

Yesterday, the world learned of the death of Hollywood legend Charles Grodin, one of the most gifted and beloved comedic actors of his generation. While he had had some small but prominent roles throughout the sixties, in movies like Rosemary’s Baby and the film adaptation of Catch-22, Grodin’s big break came in Elaine May’s 1972 masterpiece The Heartbreak Kid, in which Grodin played the lead role of Lenny Kantrow, a self-absorbed sporting goods salesman on a determined path of marital misadventure. The screenplay, by Neil Simon, was adapted from Bruce Jay Friedman’s short story “A Change of Plan,” which appears in his Collected Short Fiction. In this unforgettable scene near the movie’s comedically devastating climax, Grodin’s Kantrow makes dinner conversation with the culturally alien midwestern family of Kelly, his (latest) intended, played by Cybill Shepherd. No deceit in the cauliflower!

An interview with Juan Rulfo

Last Sunday would have been the 104th birthday of Mexican author Juan Rulfo, who, in the words of Spanish journalist Joaquín Soler Serrano, “with a single book… earned a universal reputation and respect and admiration as a writer unlike any other.” The book in question, of course, is Pedro Páramo, Rulfo’s modernist masterpiece about a man’s search for his own heritage, legendary for its vivid surrealism and daring, intoxicating prose. We’re delighted to publish it in a translation by Margaret Sayers Peden, with a foreword by Susan Sontag. In this interview for the Spanish TV show A fondo in the late seventies, Serrano talks to Rulfo about his ancestry, his years as a student of accounting, writers’ living in the world of dream, and more.

When we published Peden’s translation in 1995, it was a major event — previous English renderings had, by general critical opinion, missed the mark, failing to convey the uncommon power that had, for instance, prompted Gabriel Garcia Márquez to commit the original novel to memory in its entirety. Here, from 1995, is James Polk’s New York Times Book Review write-up of our edition, featuring Peden’s translation and Sontag’s introduction. It doubles as a look back at the book’s influence from forty years on, and makes for excellent reading. 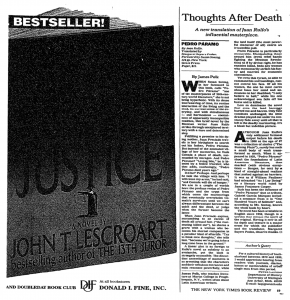 “Although Juan Rulfo’s only additional fictional output before his death in 1986 at the age of 67 was a collection of stories (‘The Burning Plain’), rarely has such a small body of work transformed so much. When it appeared in 1955, ‘Pedro Paramo’ shook the foundations of Latin American literature, then marked (with obvious exceptions — Borges, for one) by a kind of straight-ahead realism that pushed against no barriers. It was as if William Faulkner had unleashed ‘As I Lay Dying’ on a literary world ruled by James Fenimore Cooper.” Continue reading…

Pedro Páramo on the big screen

There’s plenty more out there for Rulfophiles new and old to discover, including Ariel Dorfman’s excellent New York Review of Books write-up, which we shared last year on Rulfo’s birthday. For now, here’s Carlos Vela’s 1967 film adaptation of Pedro Páramo, in its entirety. No subtitles, alas, but even if you don’t speak Spanish, it’s worth watching for its stark imagery depicting Comala, the spectral village at the heart of the novel.

Today would have been the 85th birthday of Hollywood legend Dennis Hopper, who died at 74 in 2010. While Hopper appeared in any number of indelible roles in movies like  Cool Hand Luke, Blue Velvet, and True Romance, today we’re remembering Easy Rider, the movie that first put Hopper on America’s cultural map in a big way, which he co-wrote with co-star Peter Fonda and Grove legend Terry Southern. (An article by Peter L. Winkler a few years ago in the LA Review of Books admirably traces the full, complicated story of the movie’s screenwriter credits.) Here are two classic scenes from the movie, including a memorable shout-out to another of history’s great Grovers, D.H. Lawrence.

Gil Scott-Heron enters the Rock and Roll Hall of Fame

Last Wednesday, the Rock and Roll Hall of Fame announced its 2021 inductees, and we were delighted to see one of our favorite names on the list: Gil Scott-Heron! A poet, singer, memoirist, and, by his own reckoning, “bluesologist” — and one with few peers — Scott-Heron changed the world by demonstrating new possibilities for combining music with deep roots in the blues, poetry with a biting wit and powerful sense of social outrage, and a wonderful, distinctive intelligence the likes of which we won’t see again anytime soon. The Hall of Fame has honored him with its Early Influencer Award, and will formally induct him in Cleveland on October 30. Here, at the Jazz Times, is the story.

“The Rock & Roll Hall of Fame announced its 2021 inductees today, and among them is the pioneering singer/songwriter and poet Gil Scott-Heron (1949-2011), who made socially and politically potent music in the 1970s that fused jazz with R&B and who—although he preferred to refer to himself as a ‘bluesologist’—is widely regarded as one of the earliest rappers.” Continue reading…

There’s something wonderfully immediate and powerfully intimate about this very handheld footage of Gil Scott-Heron singing his classic Winter in America in Central Park in 2010, not long before his death.