Sad but true: today’s will be our last Grove at Home of 2020! After this week, we’ll be on break for two weeks, to return with the new year on January 4th. Happy new year!

Eileen Myles, President of What

“A poem is… just an exploration of the filing system of your brain.” What could be better than five minutes in New  York City with poet Eileen Myles? With characteristic quickness, vitality, and wit, Eileen, in this short film by Chelsea McMullan, takes us to their apartment, a favorite diner, various public corners of New York (with pauses to immortalize street scenes on Instagram) — all while offering a rush of observations on poetic process, memories of their 1992 presidential run, reflections on the politics of the Trump era, and more. This January 1st, don’t miss Eileen (and more than 200 other poets) sharing their work online in the Poetry Project’s 47th Annual New Year’s Day Marathon.

We officially published some of 2020’s Best Books

As we wind down what has, by any standard, been an incredibly difficult year, we’re also delighted to see a bumper crop of journals, libraries, and booksellers listing their favorite reads of 2020 — and especially grateful to find a tremendous number of our titles included. In fact, we were so excited that we’ve built a webpage listing all of them — here’s a look at which of our books made Best-of-2020 lists — and which lists they made. Enjoy!

Check out all the lists…

We can think of no better way to close out 2020 than to spend four minutes gazing happily at this footage of a bemused Samuel Beckett acting the flâneur around late-sixties Berlin. (Especially love the footage of Beckett walking-and-talking with a friend around the three-minute mark — oh, for a time machine and a parabolic mic!) Enjoy, and we’ll see you next year. Till then, wishing our whole community of writers, readers, librarians, and booksellers a little well-deserved rest for the holidays.

Jean Genet at the Freud Museum

In 2015, London’s Freud Museum staged a Festival of the Unconscious, in which a number of artists revisited Sigmund Freud’s 1915 paper “On the Unconscious” and shared work inspired by the encounter. In this video, artist Joe Banks shares his contribution to the exhibition, “The Portrait of Jean Genet,” a multimedia installation built around video footage of Jean Genet, whose 110th birthday is this weekend.

As we endure the last few months of anticipating The Committed, Viet Thanh Nguyen’s preposterously exciting sequel to his Pulitzer Prize-winning, forever landscape-of-fiction-altering  2015 debut novel The Sympathizer, we’re grateful for all the Viet we can get. And yesterday, we got some, wonderfully, when Viet published a powerful op-ed in the New York Times, looking at lessons the Democratic Party can learn from the voting patterns of the Asian-American community — or, perhaps better said, from “enormously diverse” Asian-American communities, since, as Nguyen notes, “the category ‘Asian-Americans’ is not natural, for people in Asia do not typically imagine themselves as Asians, but rather tend to identify with specific nationalities or ethnicities.” A smart, impassioned, subtly-reasoned read.

“Asian-American activists have argued for a while that the Democratic Party has not paid their community sufficient attention. What lessons might Asian-Americans have to teach? Their ability to form a solid majority around a shared politics despite their many differences is a model for the Democratic coalition — indeed, for the whole nation. They show that both identity and political ideology matter, not just one or the other.” Continue reading…

The Art of Political Murder is now on HBO

Last night, HBO premiered its screen adaptation of Francisco Goldman’s stinging and remarkable 2007 work of reportage, The Art of the Political Murder. Co-produced by George Clooney and Grant Heslov and directed by Paul Taylor, known for the documentary We Are Together, it makes powerful viewing, and an excellent overture to Goldman’s book — a masterwork of journalistic reportage written with the fluid prose and literary sensibility of a great novel. Here’s a trailer for the documentary:

“He  was described as quite ugly, with a pockmarked face”: Beethoven at 250

Today marks the 250th birthday of Ludwig van Beethoven! Or, at least, it probably does — the precise date of Beethoven’s birth is not clearly documented, but the date of his baptism is, and the general practice was to baptize children the day after they were born. We’re celebrating in style, by watching John Suchet speaking from the studios of ClassicFM to introduce his brilliant account of the composer’s life, Beethoven: The Man Revealed. Today, Beethoven’s status as one of history’s greatest musicians is beyond question: his Ode to Joy is used as the official anthem of the European Union and the “dun-dun-dun-duuunnnnnn” motive that opens his fifth symphony is arguably the most recognizable snippet of melody in the world. As Suchet reveals, during his life Beethoven made three unsuccessful marriage proposals, and practiced personal hygiene so loosely that his favorite restaurants kept special tables to seat him far from the rest of the clientele. It’s a wonderful, charming introduction to a riveting book:

Over at ClassicFM, in honor of Beethoven’s big two-five-oh, John Suchet has also compiled a wondrous list of Beethoven’s twenty greatest compositions. A must-read, and a must-listen. (Pro-tip for those of us expecting a blizzard today: Beethoven makes fantastic music for watching snow through a window!)

“Ludwig van Beethoven was possibly the most influential composer in the history of classical music, making it very hard to choose just 20 of his greatest works (I’m putting in an honourable mention now for the lovely ‘Moonlight’ Sonata and Für Elise!)…  But to mark the 250th anniversary of his birth… let’s give it a go.” Continue reading…

In this clip, Suchet talks with acclaimed conductor and composer Michael Tilson Thomas about the complex relationship between Beethoven and his now-lesser-known contemporary Daniel Steibelt — including the fascinating possibility that Beethoven’s third symphony, the “Eroica,” was partly inspired by an upside-down reading of an earlier piece by Steibelt. As Tilson Thomas says of Beethoven, “His gifts as a composer were so great that he could anything, even take the most unimportant bit of fluff — nonsense, really —  and he could make it into something very brilliant and entertaining, and then still have the possibility of transfiguring into something really profound.”

No celebration of Beethoven’s 250th, however literary, could be complete with spending a little time sitting back and just listening. Enjoy!

Today we are positively overjoyed to wish an exceptionally happy ninetieth birthday to the brilliant Edna O’Brien! An author of novels, poems, plays, memoirs, and short stories, O’Brien has been the recipient of honors including the Irish PEN Award, the Los Angeles Times Book Prize, the European Prize for Literature, and the bestowal of the title of Saoi by Ireland’s Aosdána. Particularly acclaimed for her peerless representation of women’s rich inner lives, in all their vital complexity and occasional contradiction, O’Brien has been praised by Colum McCann as “for half a century… the advance scout for the Irish imagination.” In this wonderful documentary shot by the British Film Institute in 1976, O’Brien talks about her work, her background, women’s place in modern Irish society, and much more. “I think there is no difference between the love of women and women and women and men and men and men. Because it’s all a malady, as I call it — a malady of the heart.” Watch this immediately!

Some news from… us!

If  you follow publishing industry news, you may have caught some news we announced to the industry yesterday: we’ve announced a new minimum salary for entry-level employees of $40,000 per year. We’ve also formed an executive committee, to help with day-to-day and larger decisions, chaired by our CEO and publisher Morgan Entrekin, and including five vice presidents: editorial director Elisabeth Schmitz, associate publisher Judy Hottensen, director of publicity Deb Seager, deputy publisher Peter Blackstock, and executive editor Amy Hundley. Frankly, we couldn’t be more excited.

“Grove Atlantic has become the latest publisher to raise the starting salary for full-time employees. The independent publisher has raised entry-level pay to $40,000. In addition, Grove has announced it has formed a new executive committee ‘to help with the day-to-day running of the company and larger business decisions.’” Continue reading Publishers Weekly’s coverage of the announcement…

It’s an exciting time of year by any definition, and adding to the joy and scintillation this week is an appearance on the Storybound podcast by none other than The Far Field author Madhuri Vijay. The clip, hosted on Lit Hub Radio, features Vijay reading several passages from the book — which won the prestigious JCB Prize for Literature — over original music by Bay Area power-pop champs the French Cassettes. Don’t miss it — you can listen right here:

Sayed Kashua and David Treuer at the 92nd Street Y

“I always like to apologize at the beginning for many, many things. So, generally speaking, I’m really very sorry.” So begins this reading Sayed Kashua gave from Mitch Ginsburg’s translation of his stunning latest book, Track Changes, at Manhattan’s 92nd Street Y this spring, just weeks before Covid precautions brought live literary events like this one to a grinding halt. Introduced by all-star Grove Atlantic editor Katie Raissian, it’s a warm, funny, and powerful offering from a book the Seattle Times aptly praised as “mournfully shape-shifting.” After Sayed, another of our very favorite writers — the utterly wonderful David Treuer —  delivers a powerhouse reading from his latest, The Heartbeat of Wounded Knee, after proclaiming of the reading’s august venue, “It’s all downhill from here.” Simply put, an exquisite and wildly entertaining reading by two of the world’s great writers — and the video is the next-best thing to being there.

Today is the 125th birthday of Paul Éluard — the legendary French surrealist writer and antifascist, whose collaborators included André Breton, René Char, Max Ernst, and May Ray (y’know… no big deal), and whose many books include the classics Capitale de la douleur (Capital of Pain) and Liberté, the pæan to freedom that helped sustain the spirits of Nazi-occupied Paris. Today, we’re celebrating him in style by reading “Lady Love” — Samuel Beckett’s stunning translation of Éluard’s poem “L’amoureuse,” included in Beckett’s Collected Poems, and reprinted (with enthusiastic, unbylined commentary) by the Washington Post. (For more on Éluard’s extraordinary biography, check out Ruth Brandon’s splendid Surreal Lives.) 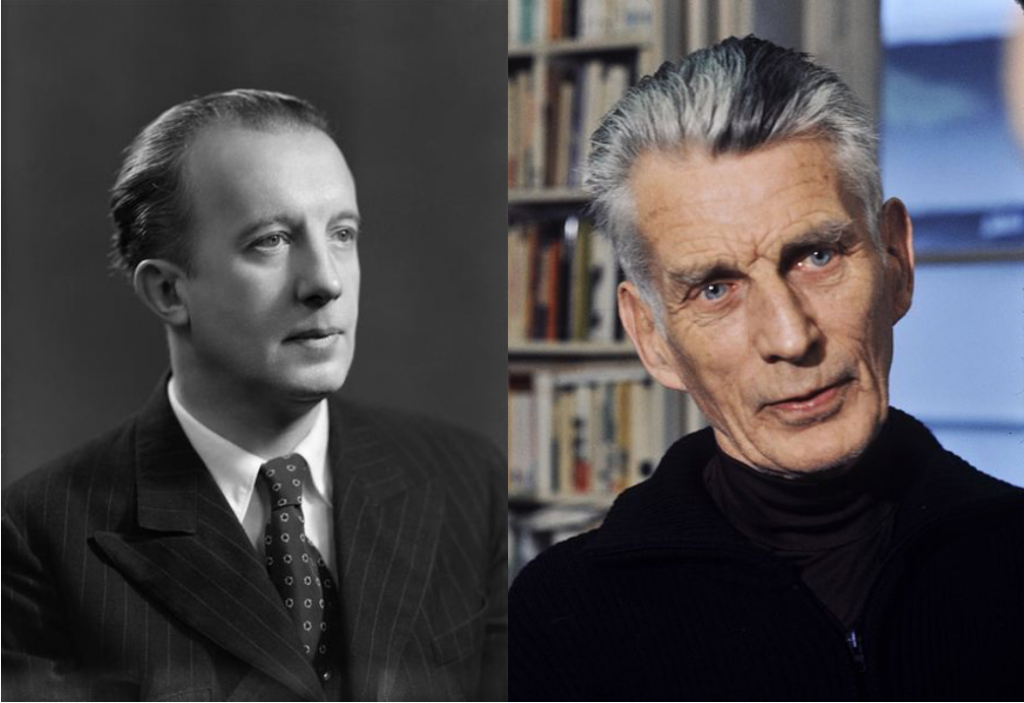 Today is also the 100th birthday of jazz legend Clark Terry. Especially well-known for playing in Duke Ellington’s band for most of the fifties, Terry also played in the Tonight Show band, Count Basie’s band, and Oscar Peterson’s band, among others, and recorded extensively as a bandleader, as well as appearing on Digable Planets’ 1993 debut album, Reachin’. Here’s Terry, who continued to play until his death in 2015 at the age of ninety-four, performing “Mack the Knife,” one of the most popular songs from Kurt Weil and Bertolt Brecht’s Threepenny Opera.