Today marks the sixty-fourth birthday of the widely-admired Mexican author Carmen Boullosa! We couldn’t be happier for the opportunity to reflect on her work, which pulses with vivid historical imagination and unabashed feminist politics. In this wonderful, short video produced by Words Without Borders, Boullosa reflects on her early life in Mexico, her origins as an author (“I had no sense of myself… and I invented that I was a writer”), and so much more — as well as sharing a few poems.

We certainly haven’t been keeping it to ourselves… We even mentioned it here yesterday. But we cannot and will not stop celebrating: this week, Helen Macdonald’s Vesper Flights debuted in a style befitting a book that’s been praised as “miraculously light and substantive at the same time,” and an author applauded for “her humility and willingness to crack herself open with awe.” This is to say, it debuted on the New York Times Best Sellers List. We couldn’t be more grateful to the hardworking booksellers who’ve made this book a success and brought it to the attention of grateful readers everywhere. And we couldn’t be happier for the brilliant Helen Macdonald. 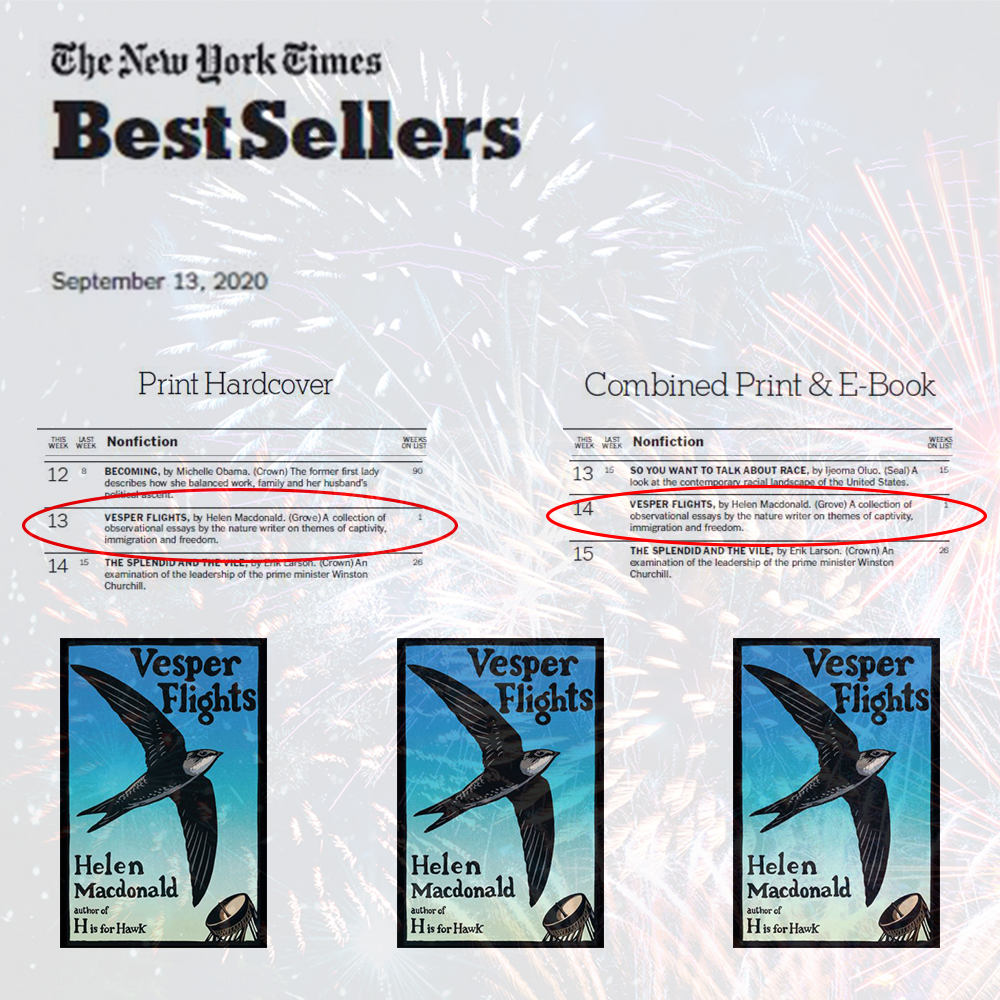 It’s a long weekend — the long last weekend of a what’s been a long, hot summer — and, just as we were last Friday, we’re leaning into it with a great DJ set from the legendary Bill Brewster. This time, it’s a set Brewster spun live at the Paradise Farage this spring. Enjoy the weekend!

Kiran Desai: “Books really meant everything, I think… We read as if we were exiles”

Today we’re wishing an extraordinarily happy 49th birthday to the great Kiran Desai, author of Hullabaloo in the Guava Orchard and the Man Booker Prize-winning The Inheritance of Loss! Here’s a wonderful interview Desai gave in 2014 to Denmark’s Louisiana Chanel, which finds her reflecting on the Delhi of her youth (“a quiet city… some afternoons were very long”), the authors who helped form her literary sensibility (Dickens, Woolf, O’Connor, Capote), the experience of being an immigrant novelist (“the kind of displacement you experience is something we also seek out in art”), and so much more. Check it out:

If you heard a mysterious holler galloping over the horizon this morning, that was probably all of us, your friendly Grove Atlantic crew, giving a socially distant shout of sheer glee at the news that Helen Macdonald’s extraordinary Vesper Flights, already a critical smash of rare proportions, has debuted in the style such a moving, extraordinary, magnificently written book deserves: on the New York Times Best Sellers list. Here, get a load of these beautiful pixels:

“The loneliness of the globalized world”

Here’s one more Kiran Desai interview to round out the day — Desai talks with journalist Clovis Casali for French TV, touching on cultural definitions of solitude, the legacies of colonialism on her reading habits, the memory of “the hell of partition” in South Asia, and much more, along with a brief segment on the French authors Édouard  Louis and Baptiste Rossi.

Last month, we had the pleasure of publishing Private Means — the debut novel of food writer and memoirist Cree LeFavour, and a book that Eat Pray Love author Elizabeth Gilbert has called “like an Ian McEwan novel. Served on a bed of Cheever… But written by a woman, which is even better.” On publication day, Cree sat down with legendary New York Times book critic Dwight Garner for a socially-distanced release event hosted by New York’s McNally Jackson bookstore. It’s a wonderful conversation — they talk about the book, reading professionally, audiobooks, privacy in marriage, and so, so much more. If you weren’t able to be there live, here’s the video. Enjoy!

“…the new movie was called Byzantium and had vampires. I love vampires.”

“I enjoy looking at men the way men look at women, or maybe the way that I look is nothing like that. Maybe I say I’m like a man because I like to own, because I understand that to look in a certain way is to acquire. That’s the only way I’ve ever wanted to look. Both ways. Like I could walk off the lot with you, or you with me. Never driven. Brand new.” Continue reading…

“Know what they call trees in a forest fire? Fuel.”

As the excellent Zoe Kazan reminded us in a tweet yesterday, Netflix subscribers can now stream Wildlife — the adaptation of Richard Ford’s novel by the same title that Kazan co-wrote with her husband Paul Dano, who also made it his directorial debut. In her Associated Press review, Lindsey Bahr noted that the film “is composed with such elegance and empathy that it actually feels like a novel with its keen sense of time and place and characters as rich as the Montana landscape, which is hard to compete with.” Rare indeed it is for a screen adaptation to garner praise that keeps pace with a book like Wildlife, which the Boston Globe praised for “stylistic grace that goes to the heart of its subject,” and the Chicago Sun-Times applauded as “full of prose that makes the reader shiver… a rich and readable story, a genuine narrative.” After watching the trailer below, Netflix subscribers can stream Wildlife right here, and can find info on the book (and links to purchase it) right here.

“No one has the right to live without being shocked”: Philip Pullman on The Good Man Jesus and the Scoundrel Christ

When Philip Pullman, an author already beloved for his His Dark Materials series and other books, ten years ago announced the title of his then-forthcoming latest novel, The Good Man Jesus and the Scoundrel Christ, some were scandalized. The book, a retelling of the life of Jesus that is by turns historical, novelistic, and fable-like, is both a deep reckoning with the contradictions at the heart of Jesus’s story and a probing search for the meaning that even avowed atheists like Pullman may find in religious narrative. In this short, powerful clip of Pullman speaking at the time of the book’s original release, he offers, simply, directly, and with impassioned eloquence, his own perspective on the controversies he could not but have known his work would stir up. In just 90 seconds, the author manages to say a great deal.

What animals taught Helen Macdonald about being human

Last week, we had the pleasure of releasing Vesper Flights, the latest from H is for Hawk author Helen Macdonald. The book has proved an instant critical success, garnering rare praise and drawing the impassioned attention of readers all over the world. Helen has long been admired as one of the most dynamic, insightful, lyrical authors working at the seams where the human world joins with nature, and in a moving essay published a few years back in the New York Times Magazine, we find ample reason why: because of the clarity and grace with which she shows us that “animals don’t exist in order to teach us things, but that is what they have always done, and most of what they teach us is what we think we know about ourselves.” Three years later, it’s the capstone essay in Vesper Flights.

“Long ago, when I was 9 or 10, I wrote a school essay on what I wanted to be when I grew up. I’ll be an artist, and I’ll keep a pet otter, I announced confidently, before adding, ‘as long as the otter is happy.’ When I got back my exercise book, my teacher had commented, ‘But how can you tell if an otter is happy?’ I boiled with indignation.” Continue reading…

A note to any musicians out there looking to get our attention: in the new video for her song “South Gotta Change,” singer Adia Victoria demonstrates exactly how: she simply begins the clip with a quote from Barry Hannah, the Mississippi author who entered the spotlight with his 1972 debut novel Geronimo Rex, and remained a bleakly hilarious voice at the forefront of Southern fiction until his death of a heart attack in 1980. We’re delighted to publish seven of Barry’s books, and were delighted to see his famous dictum that “the Deep South may be wretched, but it  can howl” finding new life as the kick-off to Victoria’s Deep-South-spanning video.

It’s the last day of August, and we’re wishing an extremely happy 38th birthday to the one and only G. Willow Wilson, author of several books of prose and a daunting number of comics, including the acclaimed 2013 relaunch of Ms. Marvel — in which the title role is assumed by Kamala Khan, a teenager of Pakistani heritage, and the first Muslim character to headline a Marvel comic. Wilson’s fiction, too, is imbued with a sense of heart-racing adventure and Muslim history, as is evident in her most recent novel, The Bird King, an exhilarating story of friendship, freedom, and belief set against the backdrop of the Spanish Inquisition, in the last sultanate to rule in the Iberian peninsula. Here, from last November, is some riveting footage of Wilson discussing and reading from the book at DC’s legendary Politics & Prose.

Right now, we’re looking forward to publishing The Harpy, a fable of revenge and power, of connectedness and deceit, this November. It’s the latest from Megan Hunter, whose impressionistically searing portrait of new motherhood set against ecological catastrophe, The End We Start From, we had the pleasure of publishing, to marvelous reviews, in 2017. Here, in Propeller magazine, is an interview Hunter gave in spring 2018. She talks about what she sees in the myths of the past, her own experiences of motherhood, finding a style somewhere between the conventions of poetry and prose, and much more. It’s extremely worth a read — and will only make you all the more impatient for her new work.

“It was all this thinking about birth, death, and time that led me to situate the novel in the future—and for me visions of the future, for as long as I can remember, have involved environmental disaster or at least degradation. I wanted to explore the very present-tense, present moment experience of mothering a young baby alongside the inevitable ‘arrival’ of the future. It was natural that this came in the form of a flood, as many creation stories have at their core some encounter with water—as do many apocalyptic myths. It comes, perhaps, from a deep awareness of ourselves as creatures who came from water—both in the womb and from the oceans as a species—and who are destined to return to it in some form one day.” Continue reading…

Randall Kenan on place in fiction

This weekend, the world of writing suffered a tremendous loss, when Randall Kenan, a crucial Black, gay voice in Southern fiction, a powerful thinker on race, and a beloved friend to many, died at the age of 57. In 1989, we had the honor of publishing the novel A Visitation of Spirits, Randall’s first book, which exemplifies the ways Randall’s writing, in the words of the San Francisco Chronicle, “continues Baldwin’s legendary tradition of ‘telling it on the mountain’ by giving voice to the unvarnished truth about blacks and homosexuality.” He will be deeply missed. Here’s a stellar video of Randall a few years ago, speaking at Seattle’s Hugo House on a subject in which he was an expert: the role of place in fiction. 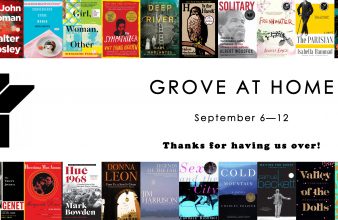