In October, 2016, writer and legal scholar Yxta Maya Murray appeared in the 100th event staged by Quiet Lightning, a Bay Area event series that’s been running since 2009. Her reading engaged with the work, and the horrific death, of legendary Cuban-American artist Ana Mendieta. Powerful, and powerfully worth watching.

This one doesn’t really require much introduction. For Vogue, the singular Claudia Rankine has profiled Lizzo. Yes, you read that right. Oh, and there are photos by Hype Williams. What are you waiting for? 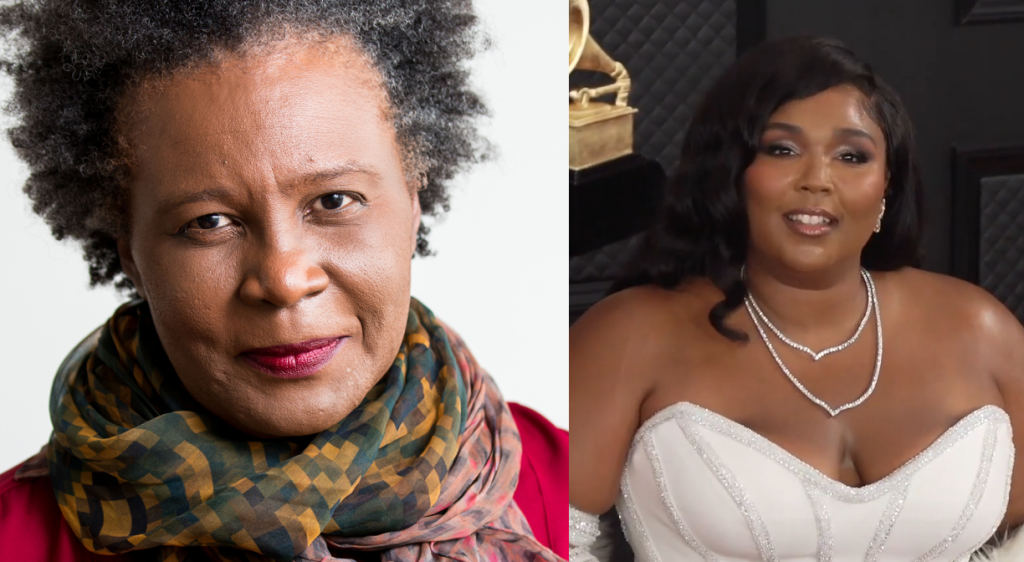 ““I love you, don’t you forget it, you beautiful Black masterpiece!” Lizzo sings. Here was Lizzo’s first message to Minneapolis and by extension the country: ‘I’m done with the struggle. I just wanna enjoy my life now and maybe appreciate my skin.’ This enjoyment, this recognition, is for her the revolution. It’s in your face. Sometimes it’s a protest. Sometimes it’s just feeling free. But whatever the fuck it is, it’s being alive in our beautiful Black skin.” Continue reading…

“I guess the world has always been the world”: Mary Jo Bang discusses her work

Back in 2013, the LA Review of Books stole a few minutes with acclaimed poet Mary Jo Bang at that year’s LA Times Festival of the Book. Bang discussed how a copy of our friend Lawrence Ferlinghetti’s A Coney Island of the Mind helped jump-start her life as writer, as well as other influences, the subtlety art of “mining some kind of vexed interiority,” and much more. Let the spirit of this short, wonderful clip launch you into a weekend full of curiosity and candor.

In 1997 we published Charles Frazier’s Cold Mountain, a bracing novel set against the stirring events of the Civil War. It would go on to spend more than a year at the top of the New York Times Best Sellers list, win the National Book Award, and spawn a now-classic screen adaptation. Here’s Charles Frazier discussing the book, its inspiration, and its aftermath for UNC-TV’s North Carolina Bookwatch.

“In times of crisis, we must all decide again and again whom we love”

The best poetry has a way of remaining insistent, persuading us of its relevance even as the particular historical circumstances that surrounded its composition change. The crises we face today could not have been foreseen more than sixty years ago, when Frank O’Hara wrote his poem “To the Film Industry in Crisis” — indeed, the biggest crisis presently being faced by that industry, the closure of movie theaters worldwide in response to the Covid-19 pandemic, could scarcely have been imagined in 1957. Even so, the poem, as mordant, tender, and powerful today as it was when it was written, seems to take on new meaning in our beleaguered present moment. Read it in its entirety at poets.org. 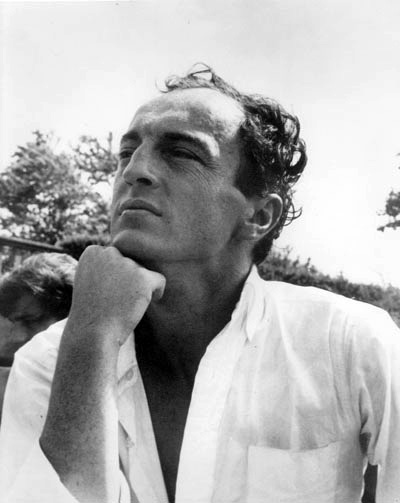 “Not you, lean quarterlies and swarthy periodicals
with your studious incursions toward the pomposity of ants,
nor you, experimental theatre in which Emotive Fruition
is wedding Poetic Insight perpetually, nor you,
promenading Grand Opera, obvious as an ear (though you
are close to my heart), but you, Motion Picture Industry,
it’s you I love!” Read the complete poem…

“Sometimes our elders are as tough as nails, and about as forgiving”: Cate Kennedy on her grandfather

On February 13, 2015, the Wheeler Centre in Melbourne, Australia hosted a night of storytelling and reflection. Among the participants was Cate Kennedy, an acclaimed fiction writer, master storyteller, and, yes, as she readily shares, a relative of the thirty-fifth president of the United States. “The elders in our lives don’t always wear tweed jackets and smoke a pipe and put their arms around our shoulder and deliver some little pearl of wisdom to us,” Kennedy explains, introducing her grandfather — quite a character, from the sound of it. This’ll make you smile, and make you think.

In 2013, with his reputation as perhaps China’s pre-eminent literary author on the rise, Yan Lianke appeared at Duke University to discuss one of the issues that has dogged his career in his native China: the banning of books. “Especially when I go back to my beloved homeland, I have this tag following me that people will just really think that, for this person always to have his books banned, that there’s something a little bit mentally off about him,” Yan offers, through interpreter Eileen Chow. The full clip is eminently worth your time.

Today would have been the 94th birthday of the legendary John Coltrane — one of the greatest musical minds of the twentieth century, and one of the most profound influences on the work of poet Amiri Baraka, who once wrote, “Coltrane is a mature swan whose wing span was a whole world. But he also shows us how to murder the popular song. To do away with weak Western forms. He is a beautiful philosopher.” A few years ago at WBGO, Nate Chinen offered a brief, powerful reflection on the strong influence Coltrane exerted on Baraka, complete with a live recording of Baraka’s poem “AM/TRAK,” dedicated to the saxophonist.

“‘AM/TRAK,’ an intoxicating poem that appears to uncoil on the page, is an elegy for Coltrane that also smolders with the tumult of the rebellion. It isn’t until the end of the poem — after Baraka has colorfully traced the saxophonist’s history (‘Begin on by a Philly night club / Or the basement of a cullut chuhch’), and claimed him as a totem (‘Trane was the spirit of the 60’s / He was Malcolm X in New Super Bop Fire’) — that he clarifies this context.” Continue reading…

Gil Scott-Heron: “Could you call on John Coltrane?”

Coltrane was also a figure of major inspiration to Gil Scott-Heron, whose song “Lady Day and John Coltrane” puts it clearly:

“No book I read until I was about 25 made any sense to me at all”: Happy birthday, Fay Weldon!

Today marks the 89th birthday Fay Weldon, novelist, essayist, playwright, and powerful feminist thinker. The author of more than fifty books, she has been enlivening public conversation witty insistence for more than half a century, in books that make forceful departures from conventional wisdom. In this fascinating 1979 clip from British TV, Fay appears on a small panel of writers and teachers to discuss the growing awareness of sexism in the world of British letters. A fascinating look at where we were not too long ago, and a chance to reflect on where we are right now.

“Now, Many Words from our Sponsor”: The New York Times on The Bulgari Connection

In early September 2001, Fay Weldon may have been the most-discussed author in the world. She had made no secret of the fact that the Italian luxury brand Bulgari had paid a significant product placement fee to secure a prominent place in her then-forthcoming novel The Bulgari Connection. While no one doubted the quality of the writing — this was Weldon’s twenty-third book, and the L.A. Times called it “classic Weldon” — the idea of product placement within a novel proved wildly controversial. By mid-month, world-historic events would eclipse the discussion (a New York Times piece on September 13th noted that the conversation had already come to seem “trivial and extraneous”), but here, from September 3, 2001, is David D. Kirkpatrick’s story on it in the New York Times. 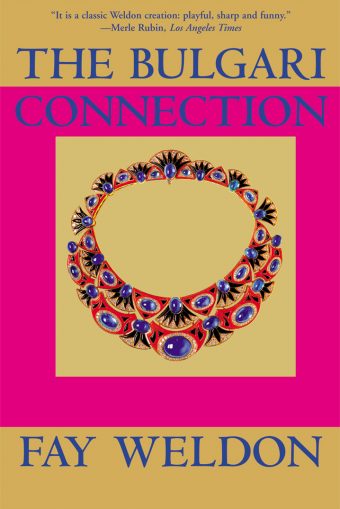 “The arrangement is believed to be a first for the book industry, traditionally one of the few corners of the media free of sponsors’ pitches and plugs. The Bulgari connection is certainly the most highly visible episode yet in an ongoing courtship pairing authors and publishers desperate for marketing support with companies eager to capitalize on the power of a reader’s immersion in a book, from organizing children’s books around the names of well-known candy or cereals to holding literary readings in fancy boutiques.” Continue reading…

“I think it is quite surprising in my novels to discover men portrayed as they’re usually not portrayed — that is, as fallible human beings.”

For one more thrilling dose of Weldon, check out this 1982 interview with Mavis Nicholson. Weldon, here very accomplished but with a great deal of her career yet ahead of her, addresses perceptions of how her books present gender, the changing role of the fiction writer, and much, much more.

What better way to begin the week than by wishing an extraordinarily happy birthday to the wonderful Kay Ryan, who turns seventy-five today? Ryan is one of the most accomplished poets working in English today, and her gifts have been warmly recognized: she’s been named America’s Poet Laureate, and has received recognitions including the Pulitzer Prize, a MacArthur Fellowship, a Guggenheim Fellowship, and the Ruth Lilly Poetry Prize. The New York Times’ Dwight Garner has written of Ryan, “Her voice is quizzical and impertinent, funny in uncomfortable ways, scuffed by failure and loss… You can’t help consuming [her] poems quickly, the way you are supposed to consume freshly made cocktails: while they are still smiling at you. But you immediately double back—what was that?—and their moral and intellectual bite blindsides you.” Here’s a video of Ryan reading at Manhattan’s 92nd Street Y, shortly after the release of her 2015 collection Erratic Facts.

A Look at the National Book Award for Fiction’s Longlist

Late last week, we checked in with acclaimed Indian author Perumal Murugan in celebration of the excellent news that his latest book to appear in English translation, The Story of a Goat (translated from the Tamil by N. Kalyan Raman), has been longlisted for a National Book Award for Translated Literature.  Today, we’re kicking off a new week with some more, equally terrific news: we learned on Friday that Shuggie Bain, Douglas Stuart’s wonder of a debut novel, has made the longlist for the National Book Award for Fiction! It’s an utterly remarkable list all around — we’re delighted to see so many brilliant names, including our friends Christopher Beha and Randall Kenan — and a powerful reminder of the unstoppable wonder that is the literary community.

“Set in Glasgow in the 1980s, Shuggie Bain by Douglas Stuart is an epic portrayal of a working-class family haunted by alcoholism. Each of their experiences are portrayed with great care through the eyes of lonely Hugh ‘Shuggie’ Bain, who finds himself at the margins of his own family.” Continue reading…

Today marks the 108th birthday of legendary animator Chuck Jones. Jones is one of a number of figures whose inspirations, legacies, and uncontainable creative genius are explored in Wild Minds: The Artists and Rivalries that Inspired the Golden Age of Animation, forthcoming from Reid Mitenbuler this winter. Jones was the creative force behind a number of cartoons starring beloved characters like Bugs Bunny, Daffy Duck, Pepé Le Pew, and more. Here’s a literary tidbit he worked on that’s less remembered: the 1970 cinematic adaptation of The Phantom Tollbooth that Jones co-wrote, co-directed, produced, and even made a brief cameo in. 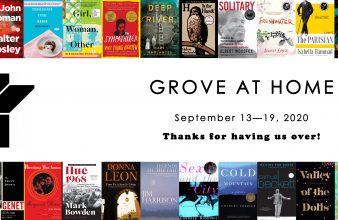