Today marks the 130th anniversary of the coronation of Queen Lili‘uokalani, the last ruler and only-ever queen of the independent Hawaiian Kingdom. Lili‘uokani’s story — and the tragic story of her entire family — is told wonderfully in Julia Flynn Siler’s Lost Kingdom. This summer, we shared Siler’s appearance on PBS’s “American Masters” to discuss Lili‘uokani. Today, we’re watching this terrific virtual tour of some of the sites Siler visited in researching the book. It’s got everything: sun-drenched beaches, mercurial sugar barons, buildings owned by Danielle Steel, and a healthy dose of moving and astonishing history.

This summer, as America was reconsidering the role of public monuments in how we preserve and relate to history, Julia Flynn Siler wrote a blog entry about the statue of Queen Lili‘uokalani that faces Hawaii’s state capitol building in Honolulu. If you didn’t see it then, today’s a perfect time to read it.

“At a time when statues are toppling across the nation, one work of public art stands tall.

“It is the eight-foot-tall bronze of Hawaii’s Queen Lili’uokalani, who faces the state Capitol in Honolulu. This  beautifully rendered artwork, by the American realist sculptor Marianna Pineda,  is even more powerful today than it was when it was erected in the 1980s.” Continue reading…

If you’d like one more way to get excited about Lost Kingdom, here it is — a book trailer! You can also follow Siler on Twitter, check out her webpage, or read more about the book right here.

Today marks the eighty-fifth birthday of legendary Albanian author Ismail Kadare, a renowned anti-totalitarian voice whose work across genres — fiction, essays, poetry, plays — comprises more than 75 books. It’s hard to find clips of Kadare speaking English (French speakers are in luck!), though he can be read in English thanks to the brilliance and dedication of any number of hardworking translators. Last fall, as part of the festival celebrating Kadare’s being awarded the Neustadt Prize, World Literature Today hosted a fascinating panel discussion on Kadare’s work and influence, featuring three of his translators: Ani Kokobobo, Peter Constantine, and David Bellos (translator of, among other books, Twilight of the Eastern Gods and the Man Booker Prize-winning The Siege). Moderated by Emily Johnson, it’s a riveting discussion of one of the world’s most influential, admired, and urgent writers.

Some lockdown fitness advice from your new trainer, Will Self

As untold many of us have been learning for the past year, it can be hard to get enough exercise when you’re living in lockdown. Over at Men’s Health, the wondrous Will Self — whose scorchingly candid memoir Will is out now in paperback! — has a solution: walk around. A lot. It’s both excellent advice written in Self’s distinctively pungent prose, and your best bet at getting the “Karl Marx quoted in Men’s Health” square on your bingo card filled in anytime soon.

“The great virtue of walking as a serious pursuit is that it requires nothing by way of equipment or specialist kit except the comfortable and hard-wearing shoes you already possess. There are no joining fees to walk, and you certainly won’t feel body-shamed by your fellow pedestrians, many of whom will be pensioners on their way to the shops. Walking is also by its nature spontaneous: you do it all the time, anyway, so why not simply increase the amount you do? The pensioners are strolling to the shops. So can you. And you can do it even if the shops are a lot further off. Which brings me to my main selling point for new-entrant walkers: its immediacy is what makes walking so appealing. There’s no need to locate a venue; you simply get up and walk out whichever door is nearest. I’m fairly rigorous about this aspect of walking, and I think it’s key to the success of the entire enterprise.” Continue reading…

Viet Thanh Nguyen on history, identity, politics, and the art of writing

The countdown continues: in just under six weeks, we’ll finally publish The Committed, Viet Thanh Nguyen’s intensely-anticipated sequel to his Pulitzer Prize-winning debut novel The Sympathizer. As we try to manage our impatience, we’re enjoying this video of a talk Viet gave at Harvard University’s Radcliffe Institute in early 2018, considering how history, identity, and politics have impacted his life and defined his work, and about how, in his words, “I’ve become a writer and a scholar who has tried to take those things and work with them simultaneously. And the reason why history, identity, and politics have been so important to me as a writer is not simply because I’m Asian, but because I’m a refugee.” After a fantastic talk, Viet settles in for a discussion with The Resisters author Gish Jen.

Today marks the 76th anniversary of the Soviet army’s liberation of Auschwitz, an event memorialized each year as International Holocaust Memorial Day. We’re marking it by reflecting on the devastatingly short life of Petr Ginz. Petr was a remarkable Czech artist, writer, and diarist who produced an astonishing body of work before he was murdered by the Nazis at Auschwitz in September 1944 —just a few months before the camp’s liberation — at the age of just sixteen. His surviving journals — which we’re honored to publish in a book edited by Ginz’s sister, Chava Pressburger, with an introduction by Everything is Illuminated author Jonathan Safran Foer — comprise one of the most stirring and exceptional human documents of World War II-era Europe. Here, in a short video produced by Yad Vashem, Holocaust scholar Liz Elsby discusses Ginz’s life, with a special focus on Vedem (“We Lead”), the small magazine he edited while living in the Terezín ghetto.

When Petr Ginz went to space

In much of his work as a writer and artist, Petr Ginz showed a fondness for science-fiction — over his short life, he wrote six novels in the genre, and completed a number of drawings on themes taken from a fascination with space travel and robotics. In 2003, Israeli astronaut Ilan Ramon — son and grandson of Holocaust survivors, and the only foreign national ever awarded the US Congressional Space Medal of Honor — took a copy of Petr’s drawing of the Earth as seen from the moon with him on the ill-fated 28th voyage of the Space Shuttle Columbia. On February 1, 2003, the Columbia exploded on re-entering Earth’s atmosphere, killing all seven astronauts on board, including Ramon, on what would have been Petr’s 75th birthday. 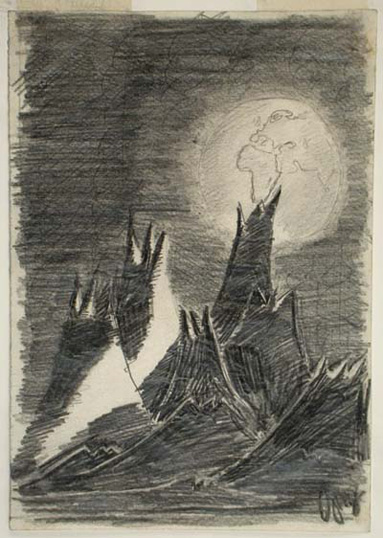 “One of the treasured objects lost in the Columbia space shuttle disaster was a painting of the Earth as it might look from the moon, created 61 years ago by a Jewish teenager in a Nazi concentration camp. Petr Ginz, born in 1928 to a Jewish father and a non-Jewish mother, painted ‘Moon Landscape’ at Theresienstadt, a Nazi showcase just north of Prague intended to demonstrate that captive Jews had a good life.” Continue reading…

The Last Flight of Petr Ginz

In 2012, First Run Features released “The Last Flight of Petr Ginz,” an astonishing film by Sandra Dickson and Churchill Roberts that celebrates Petr’s life and art through animations made from his own drawings. Here’s a short trailer, featuring some of Petr’s art and some reminiscences by his sister Chava (who here goes by “Eva,” the Czech form of the name).

It’s been two weeks now since we published Walking with Ghosts, Gabriel Byrne’s lyrical, fearlessly candid memoir. This week, Gabriel appeared on Texas Public Radio’s Book Public for an excellent, nearly hour-long discussion with Yvette Benavides, touching on the nature of memory and loss, his prolific acting career, and more. Click the image below to listen. 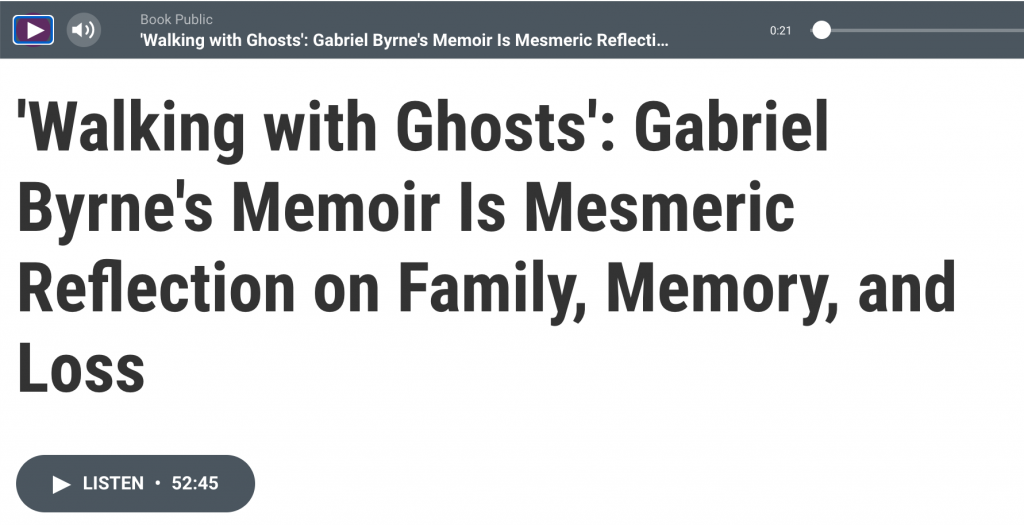 Not for nothing, Samuel Beckett is relevant during the pandemic

Samuel Beckett is certainly a writer whose work and thinking seems increasingly relevant as many of us round out our tenth consecutive month in lockdown. As theater critic Laura Collins-Hughes writes this week in the New York Times, two particular films are worth mentioning as part of this year’s socially-distanced Exponential Festival, dedicated to New York City-based emerging artists working in experimental performance. Called “The Puzzlers” and “The Puzzlers 2: Black Box,” they’re credited jointly to Beckett and Jess Barbagallo, and riff on Beckett’s early-fifties “Texts for Nothing” in what Collins-Hughes calls “a heightened, deadpan loopiness that elicits belly laughs.”

“In ‘The Puzzlers,’ an actor named Jay (Barbagallo, who shares the writing credit for both scripts with Beckett) is at home in Brooklyn with his acting coach (Lucy Kaminsky) and his dog (Bluet), struggling to memorize a section of ‘Texts for Nothing.’ His grown daughter (Davis) interrupts, scandalized that he spent $7.49 on a little tub of almond pesto.” Continue reading…

“Thank you, I stand by this message,” poet Eileen Myles says to Michael Silverblatt, legendary host of KCRW’s literary talk show Bookworm, in response to his reading one of their poems aloud. What follows is a conversation that’s edifying, funny, candid, and fascinating. Listen at once!

Alison Weir on the “manic heights” of Anne Boleyn’s popularity

Today marks the 488th wedding anniversary of England’s King Henry VIII to Anne Boleyn, whose reign as queen ended with the dissolution of the marriage three years later — and just two days before her execution on charges that included adultery and treason. It’s a story enthrallingly told in Alison Weir’s The Six Wives of Henry VIII, a book that’s been called “gripping” (Chicago Tribune) and “brilliantly written and meticulously researched” (San Francisco Chronicle), and praised for “combin[ing] the accessibility of a popular history with the highest standards of a scholarly thesis” (Detroit News). In this short video, Weir discusses popular perceptions of Anne Boleyn nearly half a millennium on, including the movie The Other Boleyn Girl and TV’s The Tudors. “She’s become a celebrity. She’s become a star.”

As America continues its struggle to understanding the events that shook Washington on January 6th, playwright, poet, and scholar Oliver Mayer offers a helpful lens in a new article at Zócalo Public Square: Bertolt Brecht’s Verfremdungseffekt, which Mayer defines as a tactic in which the playwright creates “a jolt that force[s] an audience awake and into an analytical mind.” Reading the insurrection through an understanding of the V-effekt, Mayer writes of the hope that it will provide “the jolt needed to reawaken our intellectual empathy.”

“How strange to watch Trump’s failed insurrection on Congress unfold from one’s living room TV during COVID lockdown—sidelined by stay-at-home orders, reduced to binging the way one might devour The Queen’s Gambit or Ozark into the wee hours with snacks and pets sharing the couch. Watching an attempted coup was a strangely stupefying and passive experience.” Continue reading…

Will Self reads from Phone

Today is the 106th anniversary of the first transcontinental phone call placed in the United States, Alexander Graham Bell’s call to his assistant Thomas Watson. Admittedly, it’s something of a loose connection, but to celebrate here’s the great Will Self, reading from his acclaimed novel Phone at Politics and Prose in February 2018, after an introduction in which bookseller and philosopher David B. Johnson refers to the trilogy of which Phone is the capstone as “perhaps the most ambitious and important literary project in the twenty-first century,” adding, “Will Self’s work, especially this book, has to be read.”