Happy Pride! As the country parades and parties in celebration of LGBTQ+ culture and rights this month, we’re revisiting a selection of the outstanding queer fiction, memoir, and history that we’ve published over the years. Enjoying LGBTQ+ literature isn’t limited to June—but this month is certainly a great occasion to celebrate this brilliant literary tradition, and get some exciting new titles on your To Be Read list.

Afterglow (a dog memoir) / Eileen Myles
Prolific and widely renowned, Eileen Myles is a trailblazer whose decades of literary work “set a bar for openness, frankness, and variability few lives could ever match” (New York Review of Books). Afterglow (a dog memoir) is a heartfelt, fabulist investigation into the true nature of the bond between pet and pet-owner, painting a kaleidoscopic portrait of Myles’s beloved confidant: Rosie the pit bull. A new poetry collection by Myles is on the horizon too: Evolution, in which Miles upends genre in a new vernacular that enacts—like nobody else—the way we speak (inside and out) today.

After the Blue Hour / John Rechy
The Lambda Literary Award-winning After the Blue Hour is “tense metafiction” (Publishers Weekly) narrated by a twenty-four-year-old writer named John Rechy. Fleeing his turbulent Los Angeles life, Rechy accepts an invitation to a private island from an admirer of his work—Paul. Conversing together about literature and film during the spell of evening’s “blue hour,” John feels surcease, until Paul candidly shares intimate details of his life. He reveals an affinity for erotic “dangerous games,” pulling Rechy ever deeper into the layers of his past. As the “games” veer toward violence, secrets surface in startling twists and turns, rendering an explosive confrontation inevitable.

The Angel of History / Rabih Alameddine
Set over the course of one night in the waiting room of a psych clinic, The Angel of History follows Yemeni-born poet Jacob as he revisits the events of his life, from his maternal upbringing in an Egyptian whorehouse to his adolescence under the aegis of his wealthy father and his life as a gay Arab man in San Francisco at the height of AIDS. A profound and winning story by the man Michael Chabon called “one our most daring writers,” The Angel of History is a powerful investigation of the war between memory and oblivion with which we wrestle every day of our lives.

Christodora / Tim Murphy
This vivid and compelling novel follows diverse characters whose fates intertwine in an iconic building in Manhattan’s East Village, the Christodora. Moving from the Tompkins Square Riots and the attempts by activists to galvanize a true response to the AIDS epidemic in the 1980s, to a future New York City of the 2020s where subzero winters are a thing of the past, Christodora recounts the heartbreak wrought by AIDS, illustrates the allure and destructive power of hard drugs, and brings to life the ever-changing city itself.

Freshwater / Akwaeke Emezi
Igbo and Tamil writer Emezi’s debut novel Freshwater made a huge splash when it published this past February. Written with stylistic brilliance and based in the author’s realities, this raw and extraordinary narrative explores the metaphysics of identity and being, plunging the reader into the mysteries of self. Its protagonist, Ada, is born “with one foot on the other side”—she begins to develop separate selves, alters who, over the course of the novel, move into control. Unsettling, heart-wrenching, dark, and powerful, Freshwater dazzles with ferocious energy and serpentine grace.

The Gay Metropolis / Charles Kaiser
Filled with astounding anecdotes and searing tales of heartbreak and transformation, The Gay Metropolis provides a decade-by-decade account of the rise and acceptance of gay life and identity since the 1940s. From the making of West Side Story, to the catastrophic era of AIDS, Charles Kaiser recounts the true history of the gay movement with many never-before-told stories. Filled with dazzling characters-including Leonard Bernstein, Montgomery Clift, Alfred Hitchcock, and John F. Kennedy, among many others—this is a vital telling of American history, exciting and uplifting.

Night Beast / Ruth Joffre
A masterful collection from an important new voice in American fiction, Night Beast is profoundly original, gorgeous. These doomed love stories and twisted fairytales explore the lives of women—particularly queer women and mothers—and reveal the monsters lurking in our daily lives. Powerful, unsettling, and wildly imaginative, Joffre’s mind-bending, genre-hopping debut is a provocative and uncommonly raw examination of relationships and sexuality, trauma and redemption, the meaning of family, and coming-of-age—and growing old—as an outsider.

Insidious Intent / Val McDermid
Scottish “Queen of Crime” Val McDermid has published novels, short stories, nonfiction and a prize-winning children’s book—and, like Rechy and Gay, is a Lambda Literary Award-winner: she received the Lambda Literary Pioneer Award in 2011. Insidious Intent is the latest in her series featuring psychologist Tony Hill and police detective Carol Jordan. Here, they’re on the hunt for a serial killer who forces the duo to confront their most haunting moral dilemma so far.

Why Be Happy When You Could Be Normal? / Jeanette Winterson
This is a memoir about a life’s work to find happiness. It is a book full of stories: about a girl locked out of her home; about a religious zealot disguised as a mother; about growing up in a north England town now changed beyond recognition; about the universe as a cosmic dustbin. It is the story of how a painful past, which Winterson thought she had written over and repainted, rose to haunt her later in life, sending her on a journey into madness and out again, in search of her biological mother. 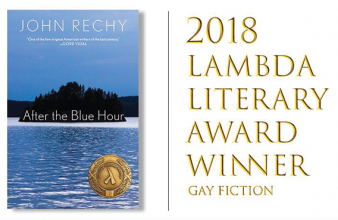 Stonewall at 50: Suggested readings for Pride!