Hearing Trump through the Lens of History

In yesterday’s Washington Post, a remarkable piece by Leave It As Is author David Gessner made some interesting observations about Donald Trump’s “overheated rhetoric.” It looks to a fascinating, horrific, and too-little-known chapter in American history: the bloody white supremacist uprising that convulsed Wilmington, North Carolina — then the state’s biggest city, and a beacon of racial pluralism — in 1898. To this day, it remains the only successful coup to take place on American soil. Gessner explains exactly where it came from, and how it grew, and he does so in part by citing Wilmington’s Lie, the electrifying account of those horrible days by Pulitzer Prize-winning journalist David Zucchino. The piece is absolutely worth reading; it tells a story every American should know. 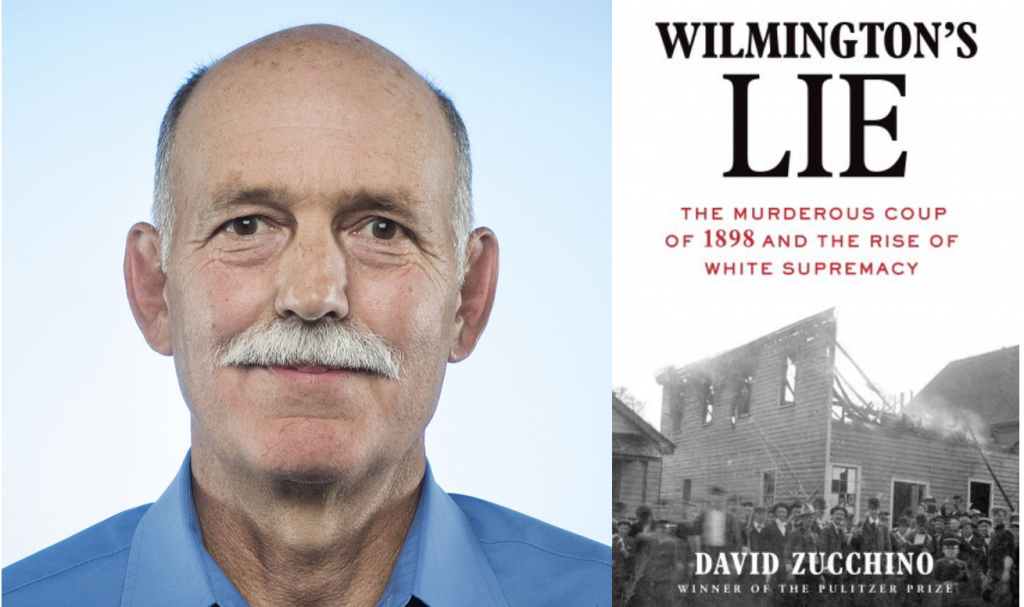 “Throughout it all, there was a consistent message: If you don’t vote for us, you won’t be safe. They argued that chaos would reign if African Americans were allowed to vote. The News and Observer was particularly effective in spreading this message. David Zucchino, whose recent book, Wilmington’s Lie, tells the story of 1898, writes that ‘More than a century before fake news attacks targeted social media websites, Daniels’s manipulation of White readers was perhaps the most daring and effective disinformation campaign of the era.’”

Today would have been the 71st birthday of Nick Tosches, the craggily brilliant author of Hellfire — a book about Jerry Lee Lewis widely considered, in the words of Rolling Stone, “the best rock ’n roll biography ever written” — and he is dearly missed. The author of more than fifteen books, he died at home in New York, a city that loved him back, just three days before turning 70 last year. We shared some great video of Nick last month, when Jerry Lee Lewis turned 85. Today, we’re listening to this track, in which Nick reads his poem “Dante in Ravenna,” from his 1999 Collection Chaldea, with a rock band, for his 2006 album For the Taking. You will not regret listening to Nick Tosches this morning.

Lunch with Nick Tosches in 1999

Also terrific is this 1999 Salon profile of Nick, in which his erudite, impish spirit can be felt lurking behind nearly every sentence and every pumpkin ravioli. 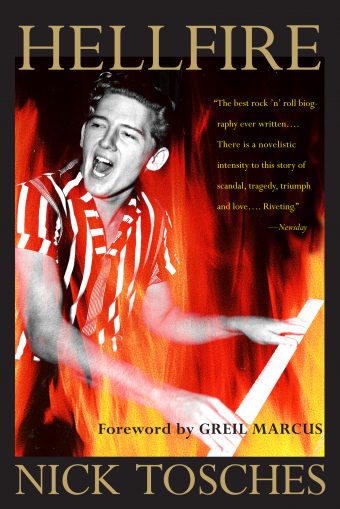 “While we’re waiting for our food, I thank Tosches for e-mailing a few links for some background information on his career. Of the 20,000 celebrity profiles to be found at biography.com, his is surely the only one thorough enough to include a future death date. It is 2022. ‘I didn’t want to leave any loose ends,’ says Tosches. I ask if there’s any significance to the year. ‘It’s not an arbitrary date. It had secret meaning.’ I then ask if he believes, as some do, that we unknowingly celebrate the day of our death every year we remain alive. After a long pause, Tosches says, ‘No, but I believe we celebrate the season.’” Continue reading…

When we published Rabih Alameddine’s An Unnecessary Woman in 2014, it made numerous best-of-year lists and was a finalist for the National Book Award. Telling the story of seventy-two-year-old Aaliya Saleh, who lives alone with a lifetime of books in Beirut, An Unnecessary Woman has been called “a meditation on, among other things, aging, politics, literature, loneliness, grief and resilience” (by the New York Times); the Boston Globe called it “succulent.” In this brief clip, Rabih gives a reading from the book at the 2014 National Book Award ceremony.

Read some “Honey, I Killed the Cats”

In 2005, we published Dorota Masłowska’s debut novel, Snow White and Russian Red, in an English translation by Benjamin Paloff. It had already become a sensation in Poland, where it was written. Writing in Harper’s, John Leonard compared it to Allen Ginsberg’s “Howl.” Just nineteen when she wrote the book, Masłowska has continued working as a writer. Here, at Body, is an excerpt from a later work of Masłowska’s, translated again by Benjamin Paloff. 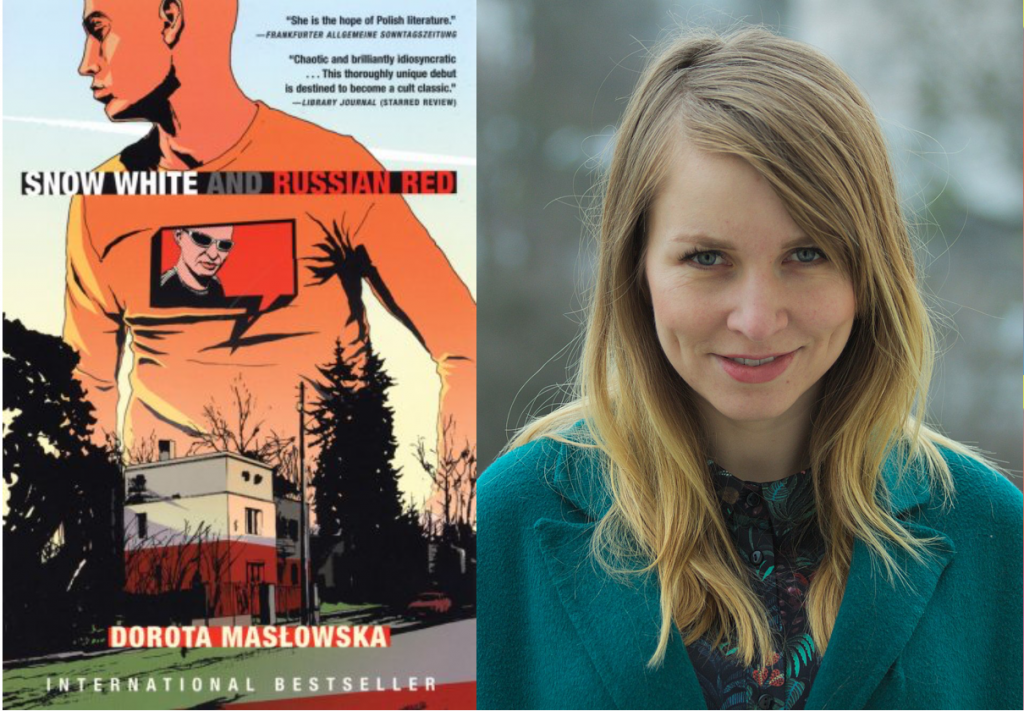 “There was a white-ruffed cat lying in the street in front of the apartment building, neither warming itself in the sun, nor really even alive, as we might surmise from the fact that there was no sun, nor any other reason to lie there among speeding cars. Some patrol will eventually come and take him away, Farah thought in her dream, and, tugging at her pajama bottoms, which had given her a wedgie, she went back to reading her magazine.” Continue reading…

Not even going to try to introduce this completely remarkable film of Henry Miller and friends in 1969. Suffice it to say, if you have even the slightest interest in Henry Miller, this is extremely worth your time.

“The sweet potato tastes amazing”: Josh Weil at the Center for Fiction

Today marks the 141st anniversary of Thomas Edison’s patent application for the incandescent light bulb. That’s an anniversary worth marking in anyone’s book, and we’re celebrating it in the traditional style: by watching this video of Josh Weil reading from his collection The Age of Perpetual Light at the Center for Fiction in 2017. After reading from the book, Josh sits down with Mike Harvkey, author of In the Course of Human Events, to discuss happiness, the revision process, and much more. Watch it with the lights on.

Looking back on The Autobiography of Malcolm X

Fifty-five years ago this week, we published The Autobiography of Malcolm X, co-written with Roots author Alex Haley. It was Haley’s first book, and it came out six months after Malcolm’s assassination. The New York Times praised it as a “brilliant, painful, important book.” Since then, numerous scholarly works on Malcolm’s life and beliefs — including Manning Marable’s Pulitzer Prize-winning biography, published just days after the author’s death in 2011 — have recontextualized and fleshed out the narrative of the Autobiography. Today, in the LA Times, Stuart Miller offers a review of Les and Tamara Payne’s new account of Malcolm’s life, The Dead Are Arising, viewing it against the Autobiography, and Marable and others’ works. Les Payne worked on the autobiography for nearly three decades, dying before it could be finished; his daughter stepped in to complete it. “People should view the ‘Autobiography’ and his speeches as the starting point,” she tells Miller, “and go from there.” 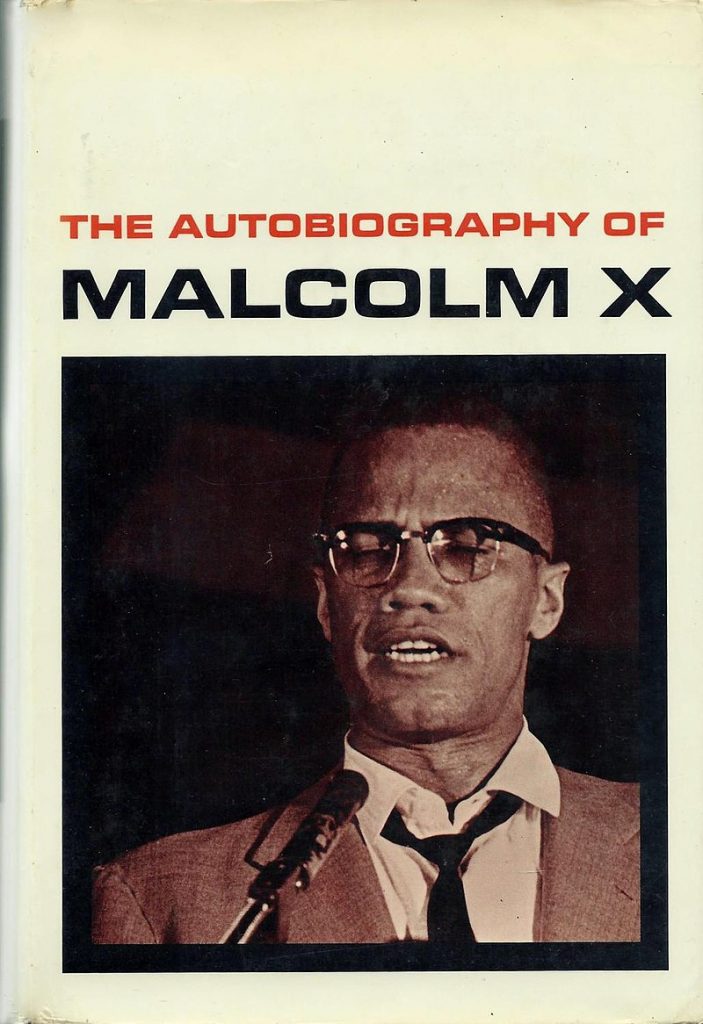 “‘The Autobiography of Malcolm X,’ published shortly after the Black nationalist leader’s 1965 assassination, was both a literary classic and the foundation of his posthumous public image. But that’s been changing in the 21st century. This month, for the second time in a decade, a new biography strips away some of the mythmaking to bring a more nuanced Malcolm to the public.” Continue reading…

Today would have been the 91st birthday of the immeasurably wonderful Ursula K. Le Guin, the peerless American writer who died in 2018 after changing the face of American letters forever. Back in August, we shared the indelible speech she gave at the 2014 National Book Awards ceremony; today, we’re reveling in this earlier appearance on local Portland TV from Le Guin’s home (photos of which went viral earlier this year). Besides serving as a veritable time capsule of bygone fashions, it’s a wonderful conversation about the writer’s life, childrearing, marriage, the meaning of genre, and much more. A must-watch for Ursula fans!

“You never want to be heavy-handed — unless, of course, you’re writing something that does call for a heavy hand”: Writing advice from Roxane Gay

It’s hard to think of an author who’s inspired more people to take up writing of their own — or one whose books are more closely read and more deeply admired — than Roxane Gay. In this short video produced for Skillshare, Roxane opens up about her own writing process and offers some excellent advice about how to think about one’s own writing, the balance between ethos, logos, and pathos, and much more. Crucial advice from one of the most revered writers working today.

Helen Macdonald is a big deal. Her memoir H is for Hawk was one of the New York Times’ 10 Best Books of 2015, praised as “breathtaking” by the New York Times Book Review and named a “captivating and beautifully written” Book of the Week by People. When we published her latest, the essay collection Vesper Flights, this summer, it was immediately recognized as a landmark work, debuting on the Times Best Sellers list, and praised as “dazzling” by the Wall Street Journal and “miraculously light and substantive at the same time” by the San Francisco Chronicle. Today, with wild boars making headlines, we’re looking back a few years to 2016, when Helen published “A Hint of Danger in the Forest” in the New York Times. It’s a remarkable meditation on encountering a wild boar, one that would eventually be adapted for inclusion in Vesper Flights as “Nothing Like a Pig.”

“My friend whistled, called, then whistled again, and I felt a flicker of recognition as a dark shape flitted between trees about 60 or 70 yards away and then ran toward us. It was a wild boar. I’ve seen images of them all my life: razor-backed beasts on ancient vases, in illustrations in medieval manuscripts, slumped in front of men with rifles in old trophy photographs. And now here one was, called into the real world.” Continue reading…

Who is Gil Scott-Heron?

If you don’t know who Gil Scott-Heron is, you should. If you do know, watch this anyway.

Today marks the sixtieth anniversary of the US trade embargo against Cuba. Whatever one’s political attitude toward the complex political realities surrounding it, the anniversary is a good opportunity to revisit the work of Cuban-American author Ana Menéndez. Born to Cuban exile parents in LA in 1970, Menéndez started her career writing for the Miami Herald on that city’s Little Havana. She would go on to publish a number of works of fiction, including the acclaimed short story collection In Cuba I Was a German Shepherd and the bestselling novel Loving Che. Last year, Menéndez joined Donna Aza Weir-Soley and Anaridia Molina of the Association of Caribbean Women Writers on their youtube channel, Talk Di Tings, to discuss some favorite jokes of the Cuban diaspora, her attitude toward teaching, her approach to craft as a writer, and more.

Last week, we had the pleasure 0f publishing A Lover’s Discourse, the latest from the acclaimed Xiaolu Guo. The New York Times Book Review has already weighed in, noting, “The truthfulness and accuracy of Guo’s language gives the book mischief and energy. There are shades of Lydia Davis in her carefully etched sentences as she details the ups and downs of the relationship without sentimentality… It’s capacious enough to touch on moments of real darkness, while somehow managing to be mordant, funny and, ultimately, life-affirming.” We’re excited about that, and excited, too, about Xiaolu’s virtual tour, which kicks off tomorrow afternoon with an event hosted by Baruch College. Don’t miss these events! 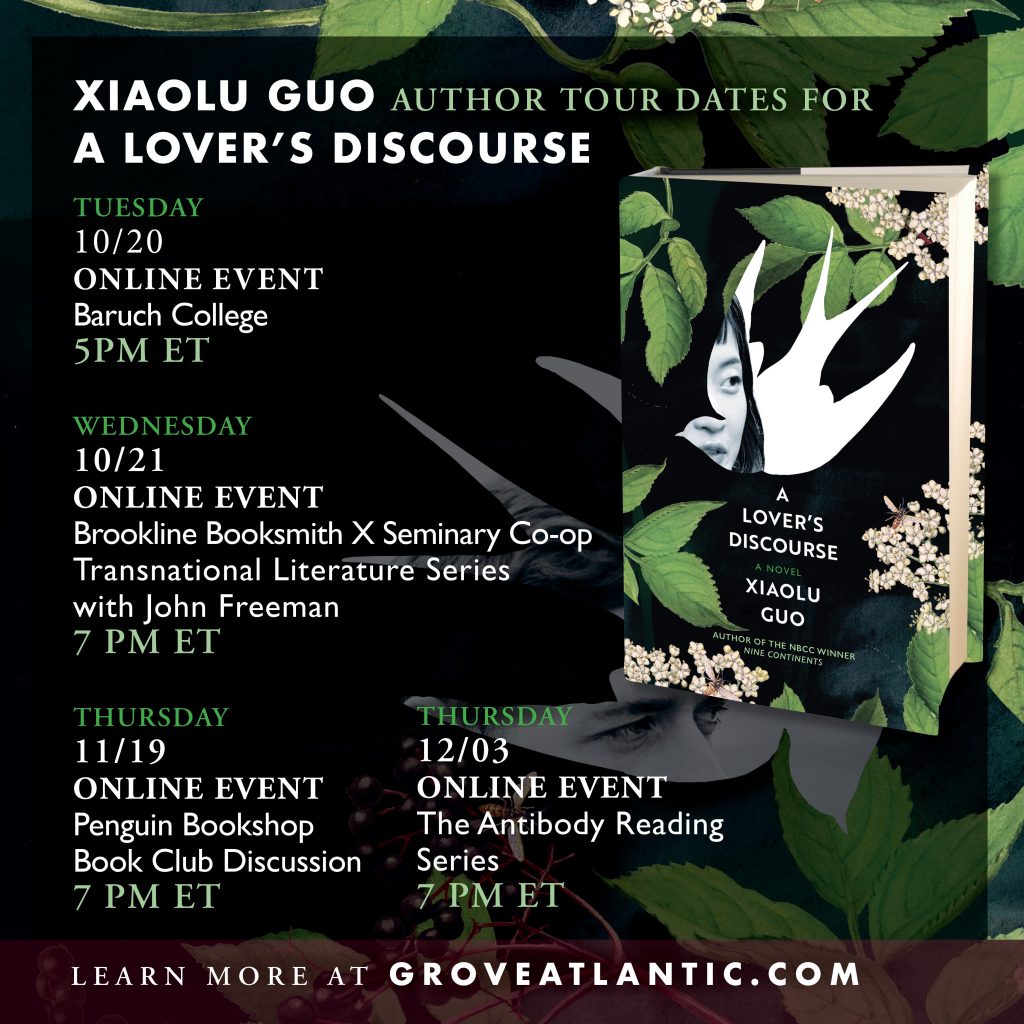 Read more about the book and these events here…

Today we’re also wishing an exceptionally happy 54th birthday to the great David Vann, author of ten books — most recently, Halibut on the Moon. In this terrific interview filmed for Denmark’s Louisiana Channel in 2014, David talks about growing up in the Alaskan rainforest (a landscape “so evocative that’s impossible to look at it without having it change shape and shift and become something strange”), redeeming a heavy family legacy of suicide, translating Beowulf, and more. A fascinating discussion with a great writer. 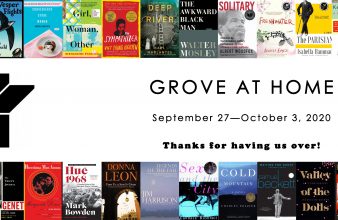